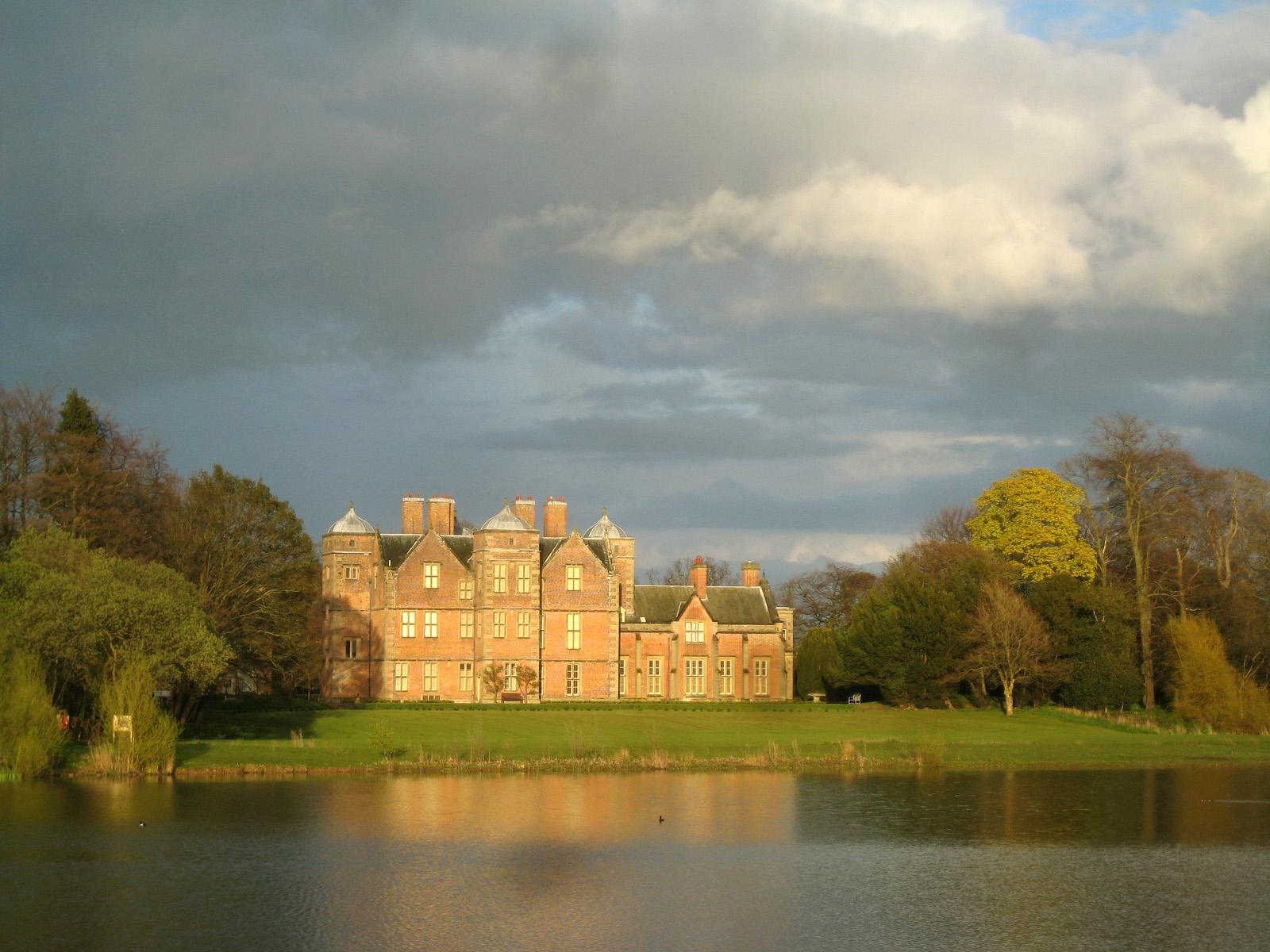 The University of Maryland Study Center at Kiplin Hall, located in northern England, is a valuable resource available to students in the School of Architecture, Planning and Preservation. In recent years, preservation students have taken summer courses here (one group studied classic English pubs) and architecture undergraduates have used it as home base for a semester abroad in Europe.

George Calvert, the Lord Baltimore, built Kiplin Hall in the 1620s and later played an influential role in establishing the State of Maryland. One of Calvert’s direct descendants, George Benedict Calvert, helped launch the University of Maryland when he sold several hundred acres of his land to the State of Maryland in 1858 for the purpose of establishing the Maryland Agriculture College. The Maryland Agriculture College went on to become the University of Maryland.

The study center was built out of what was originally a stable house and blacksmith’s shop. Since its creation in 1986, the University of Maryland Study Center at Kiplin Hall has provided affordable opportunities to hundreds of students to experience the United Kingdom and Europe firsthand.

For current opportunities, refer to the Education Abroad page.

Kiplin Hall is a Jacobean country house located near the market town of Richmond in northern Yorkshire, England. It was built in the 1620s by George Calvert, the first Lord Baltimore. Calvert had an illustrious career that included serving as the Secretary of State during the reign of King James I and founding the colony of Maryland. After his death in 1632, his son Cecil, the second Lord Baltimore, became the first proprietor of Maryland. During most of the remainder of the 17th century, the Lords Baltimore lived either in the south of England or Maryland. In 1722, Charles Calvert, the 5th Lord Baltimore, sold Kiplin Hall to his mother’s second husband, Christopher Crowe.

Under the direction of the Crowe family, Kiplin Hall flourished for the next 100 years. A grand central staircase was added to the home, along with decorative features such as ceiling cornices, dado rails, and fine fireplaces. Crowe also continuously added to the estate lands so that total acreage increased to approximately 4,500 acres by the end of the family’s tenure. Furthermore, during the 1720s Christopher Crowe added a large service wing and kitchens to north of the home. Crowe also engaged in many projects related to the landscape of the estate, including the creation of a fish pond or serpentine lake, a walled garden , and the planting of may trees on the property. While British Counsel to Italy, Crowe amassed a large collection of paintings and other works of art that remain in Kiplin.

In 1776, Crowe’s younger brother George inherited Kiplin; in 1782 the estate passed to George’s son Robert. In 1817, Robert Crowe’s daughter Sarah married John Delaval Carpenter, the 4th Earl of Tyrconnel. In 1818, Sarah inherited Kiplin Hall on the death of her father. In 1818, the Carpenters engaged architect P. F. Robinson to design a Gothic-style drawing room addition to the south end of the Hall; this room now houses the library. In addition, they had the ogee domes on the towers redesigned and built a little gothic folly across the lake. In 1868, a distant cousin, Walter Talbot, inherited Kiplin Hall with the proviso that he change his name to Carpenter. Talbot-Carpenter was a naval officer, eventually earning the rank of Admiral in the Royal Navy. Kiplin Hall proposed until his death in 1904. The Carpenters made numerous improvements including the remodeling of the entrance Hall, added a new stable wing, improved the servant’s wing, and between 1878 and 1880, constructed a new gate lodge. The Admiral and his family enjoyed Kiplin as a typical country house with weekend parties and boating and hunting excursions.

Following the death of Admiral Walter Talbot in 1904, Kiplin Hall endured a period of marked decline. The Carpenter’s daughter Sarah rented Kiplin Hall out and sold most of the acreage of the estate. During World War II Kiplin Hall was utilized by the Royal Army and the Royal Air Force. By the 1950s Kiplin Hall was in dire need of structural repair and in 1953 it narrowly avoided being demolished.  At one point there was even talk of shipping the home brick by brick across the Atlantic Ocean to the State of Maryland where it would be reconstructed. Fortunately, Kiplin was not deconstructed or demolished, due in large measure to the work of the last owner, Bridget Talbot, who was Sarah Carpenter’s cousin.

Although many preservation efforts failed to materialize, Bridget Talbot was successful in establishing a charitable trust fund for Kiplin Hall in 1968. Upon her death in 1971, Talbot left the house and contents to the Kiplin Hall Trust in her will. The Trustees took control of a property and belongings that were in very poor condition, and restoration and conservation was badly needed. In 1975, the Maryland Historical Society, Historic Buildings Council and individual donors paid for the restoration of the roof which was in derelict condition. In addition, part of the service wing addition was removed and the north tower restored.

During the 1990s a lease agreement was made to quarry sand and gravel on acreage of the estate. This ongoing agreement provided a capital fund to support the building in perpetuity. The quarrying activities created a lake in front of the Hall that was planted in order that it blend into the historic landscape setting. With financial aid from English Heritage and Kiplin Hall Trust, Kiplin Hall was completely restored during the late 1990s and early 2000s. A grand reopening was held in 2001 to mark the reopening of Kiplin Hall to the general public and to regular use.

The three story main house at Kiplin is constructed in the Jacobean style. The most distinct architectural features of Kiplin Hall are the four ogee domed towers placed in the center of each façade of the original house. The towers were castellated and the north and south towers held staircases. The four hexagonally shaped, lead covered, domes contrast sharply with the traditional red brickwork. The diamond-shaped diapering with blue/black saltglazed header bricks adds to the decorative interest of the structure. Over forty windows provide natural lighting and offer views of the surrounding landscape. Kiplin Hall sits among acres of beautiful countryside; directly behind the Hall a picturesque lake, encircled by wildflowers and frequented by geese, provides the perfect backdrop to this magnificent home.

The inside of Kiplin Hall is as impressive as the outside. As one enters the first floor of the home, the hall is located on the right. This room, with its dark oak paneled walls and elaborate plasterwork ceiling, features a large collection of family portraits. Opposite the hall is the drawing room, containing a superb collection of paintings and fine furniture. One of the highlights is the beautiful custom made Chinese Chippendale style cabinet that houses Christopher Crowe’s collection of pietra dura scenes of Italy. The Georgian fireplace now boosts a series of 19th century William Morris tiles.

Possibly the most impressive room in the entire home is the library, located in the early 19th century south addition. Everything in the Jacobean style library, from the dark oak paneling to the ceramic tiles by William de Morgan, was added by Walter Carpenter in the late 1880s.  Originally designed in the gothic style, by the 1890s the room was reworked into a celebration of the Arts and Crafts movement. Probably one of the Admiral’s favorite pieces in the room was a library chair that was taken from the H.M.S. Victory, and once owned by British naval hero Lord Nelson.

The dining room features various paintings and portraits as well as several pieces of high style furniture. For example, a semi-circular hunt table, used by gentlemen to sit and drink while warming their feet, is located next the fireplace.

A grand, cantilevered staircase leads from the center hall to the second and third floors; this feature was added by the Crowe family during the first half of the eighteenth century. Several portraits hang along the wall of the stairwell including a copy of a large portrait of the First Lord Baltimore that was donated to Kiplin Hall in 2001 by Mrs. Peyton Fowler, a direct descendent. Much like the first floor, the second is full of fascinating spaces and objects.

One of the more intriguing rooms at Kiplin Hall is Admiral Walter Carpenter’s study.  Originally a dressing room, the room has been converted to show various aspects of the Admiral’s time in the Royal Navy. The most important picture in this room is a unique hot air balloon perspective watercolor of Kiplin Hall that dates to 1780. The green bedroom contains a late 18th to early 19th -century French four post bed that was brought to Kiplin Hall by Bridget Talbot in the 1930s. A unique exercise horse, a device utilized by men who were no longer fit to ride horses, is one of the featured pieces of furniture in the green bedroom. A 17th-century Italian cabinet with ivory paneling is also housed in the green bedroom.

Kiplin Hall was directly impacted by the presence of the Royal Army and the Royal Air Force during World War II. Virtually every room inside the house was impacted in some way, and the surrounding acreage was often used to store ammunition and bombs. During the restoration of Kiplin Hall the decision was made to leave the kitchen on the second level as found so that it might serve as a time capsule of the way World War II shaped Kiplin Hall. Adjacent to the kitchen is the yellow bathroom, a wonderful mixture of Georgian, Victorian, and 1950s details.

The third floor of Kiplin Hall is dominated by the 70 ft. ‘long gallery.’ This space is currently used to display the antiques, art, and furniture of some of Kiplin Hall’s previous owners, but interestingly it was originally used as an exercise space during times of inclement weather. Numerous portraits are displayed on the walls, including a classic portrait of James I.  Another fascinating object is the large leather, inscribed on the rim “Oliver Cromwell, 1653, Lord Protector of England, Scotland and Ireland." The rooms off of the long gallery were all used to house servants, but now function as exhibit and education spaces to tell the history of Kiplin Hall and its many occupants.

The University of Maryland Study Center at Kiplin Hall is located in northern Yorkshire, in the heart of England. Only a few hours away from both Scotland and Wales, Northern Yorkshire is a gateway to many renowned cities and attractions. There are countless estates, factories, homes, markets, monuments, museums, parks, stadiums and theaters within easy reach of the facility.