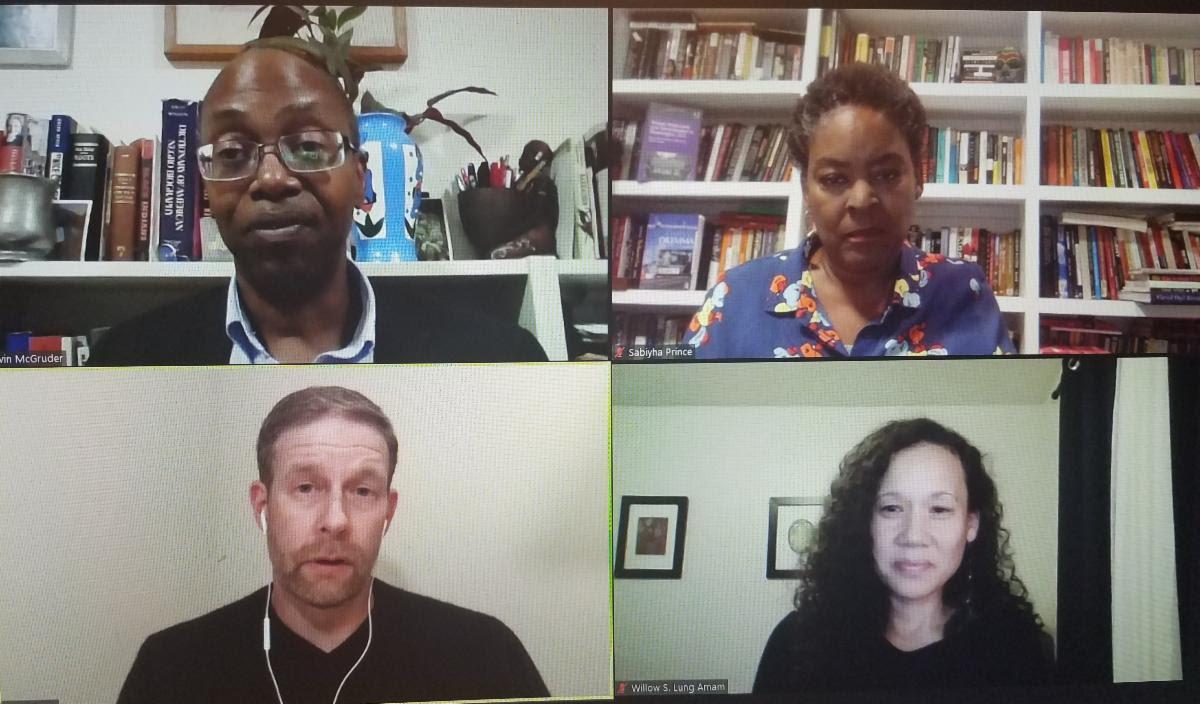 Is it too late to save Harlem from the million-dollar loft apartment? How does neighborhood displacement determine who occupies the office of city council? Will COVID-19 slow the tidal wave of development that turned the “Chocolate City” to “Cappuccino City”?

This fall’s Colvin Lecture tackled the difficult questions surrounding gentrification through the lens of two rapidly changing enclaves: Washington, D.C. and Harlem, New York. “Gentrification: Deracination of the Black Community in Harlem and Washington, D.C.” leveraged the unique perspectives of three acclaimed authors and scholars to unpack the economics, racial tactics and land-grabbing that has shaped these two alike cities, offering a candid discussion on what is at stake and where there may still be room to stem the tide of displacement.

Led by Associate Professor of Urban Studies and Planning Willow Lung-Amam, the lecture hosted Dr. Kevin McGruder, Vice President of Academic Affairs and Associate Professor of History for Antioch College; Dr. Derek Hyra, Associate Professor, Department of Public Administration and Policy, American University; and Dr. Sabiyha Prince, an independent researcher and author. The lecture, which was attended by over 200 people Wednesday night over Zoom, is now available to watch on the Colvin website.

The panelists kicked off the discussion with a deep-dive into the meaning of gentrification, explaining that, while gentrification is an often-used word with a complex definition, in the U.S. it is intrinsically tied to race, beginning with the devaluing of Black neighborhoods. Hydra pointed to the infamous urban renewal highway in the historically Black neighborhoods of Southwest D.C., which displaced 23,000 people and 1,800 businesses. McGruder discussed the profound disinvestment in Harlem that led to rampant vacancies, positioning the area as a turn-key investment opportunity for developers.

Some of the racist mechanisms that sowed the seeds of 20th century gentrification in Harlem and Washington, D.C., continue to flourish in 2020. Redlining, access to capital, even the placement of public housing, are all segregation tactics that fuel the engines of gentrification. The panel pointed to the short-sightedness of government policy makers that makes gentrification a continued, persistent problem in U.S. cities. By overlooking what is going on in a neighborhood, the panelists explain, stakeholders miss a critical opportunity: supporting and investing in residents—rather than redevelopment of the bricks-and-mortar—can lead to neighborhood resiliency, community agency and better places.

“Gentrification is a cycle that rests among disinvestment,” said Prince. “We got here through policy. We’re going to get out of it through policy as well.”

At stake is more than just legacy buildings and cultural loss. Gentrification and displacement, said the panelists, also delivers a blow to human health, dissolves community strength and even erodes political will.

“Working class people become particularly vulnerable,” said Prince. “People provide informal care and support for their neighbors, like childcare, running errands, taking a neighbor to the doctor; they rely on it. When you undermine those supports, you make them very vulnerable. These losses are a loss of resources, and are a key to economic and health impacts and isolation.”

“When plants are ripped from their roots they die,” added Hyra. “The new urban renewal of the 90s and 2000s tore people from their networks and their memories. But there is another consequence and that’s politics. When you gentrify a district, they might vote differently. There is a Black political strength that is garnered in Harlem and D.C. and, with gentrification, it gets diluted and these strongholds begin to dissipate. For decades, D.C.’s city council was Black, but now it’s majority white.”

The future, the panelists agree, will require aggressive policy change, from a re-examination of low-income housing and land trusts to revolutionizing the low-income housing tax credit. But equally important is providing the community a clear voice in the development process.

“The Colvin Center is where real estate developers are trained,” said McGruder. “They need to turn to the people near their development and ask what they want to see and incorporate those ideas into their plans. It’s important to really listen.”

And, while it is unknown if the economic fallout of COVID-19 will change the rate and speed of gentrification, the panel had some theories.

“Will COVID kill gentrification?” asked Hyra. “The stock market is still doing great, so people are putting a lot of money into development; capital is waiting to swoop in, buy it, hold it and wait for people to come back to the city. I predict we will have another wave of gentrification that may even dwarf the wave we saw in ’10. Right now, there’s a moratorium on evictions, but that will end. For investors it's looking pretty good; for low income, working people, they are in trouble and we need to help them.”