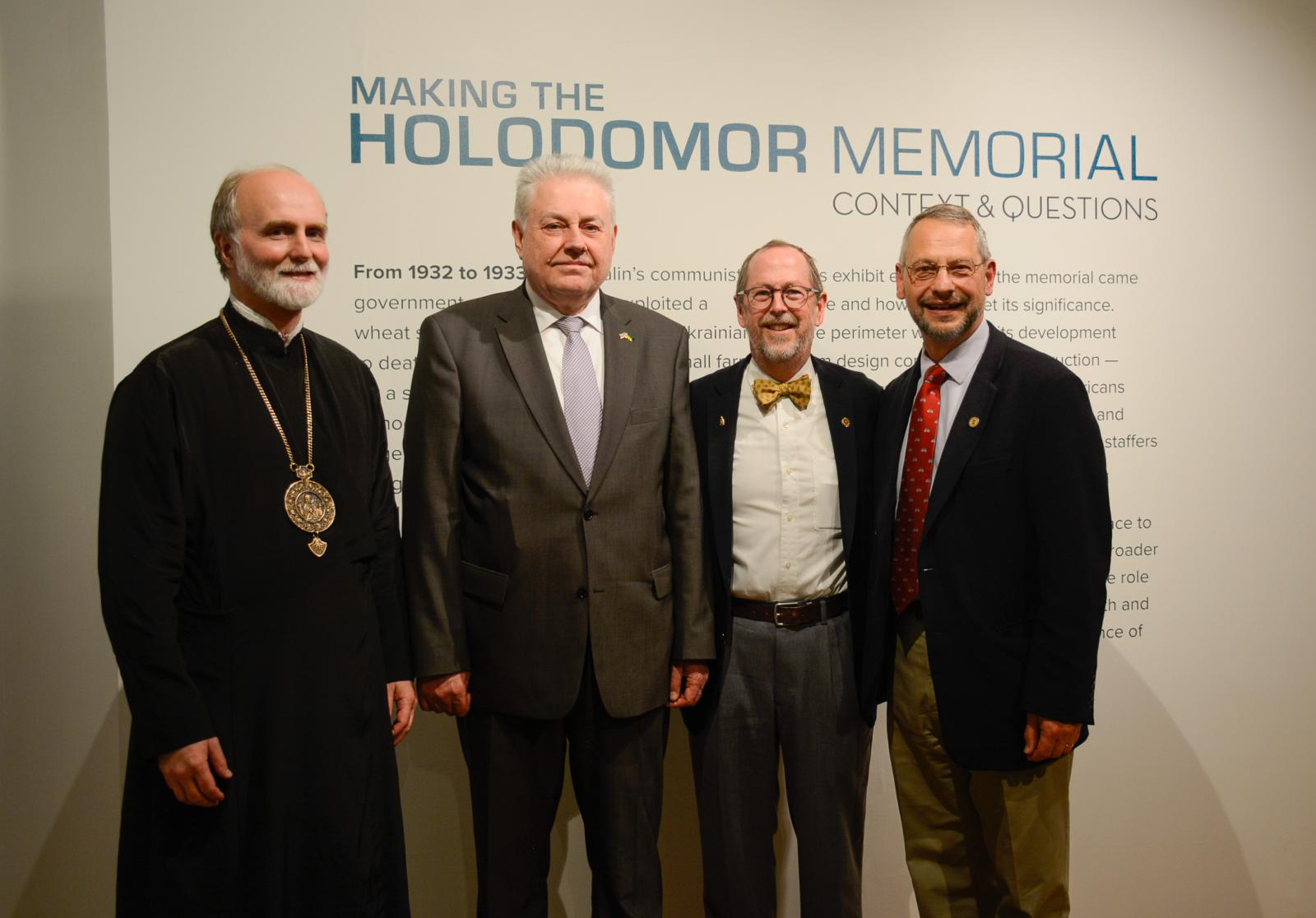 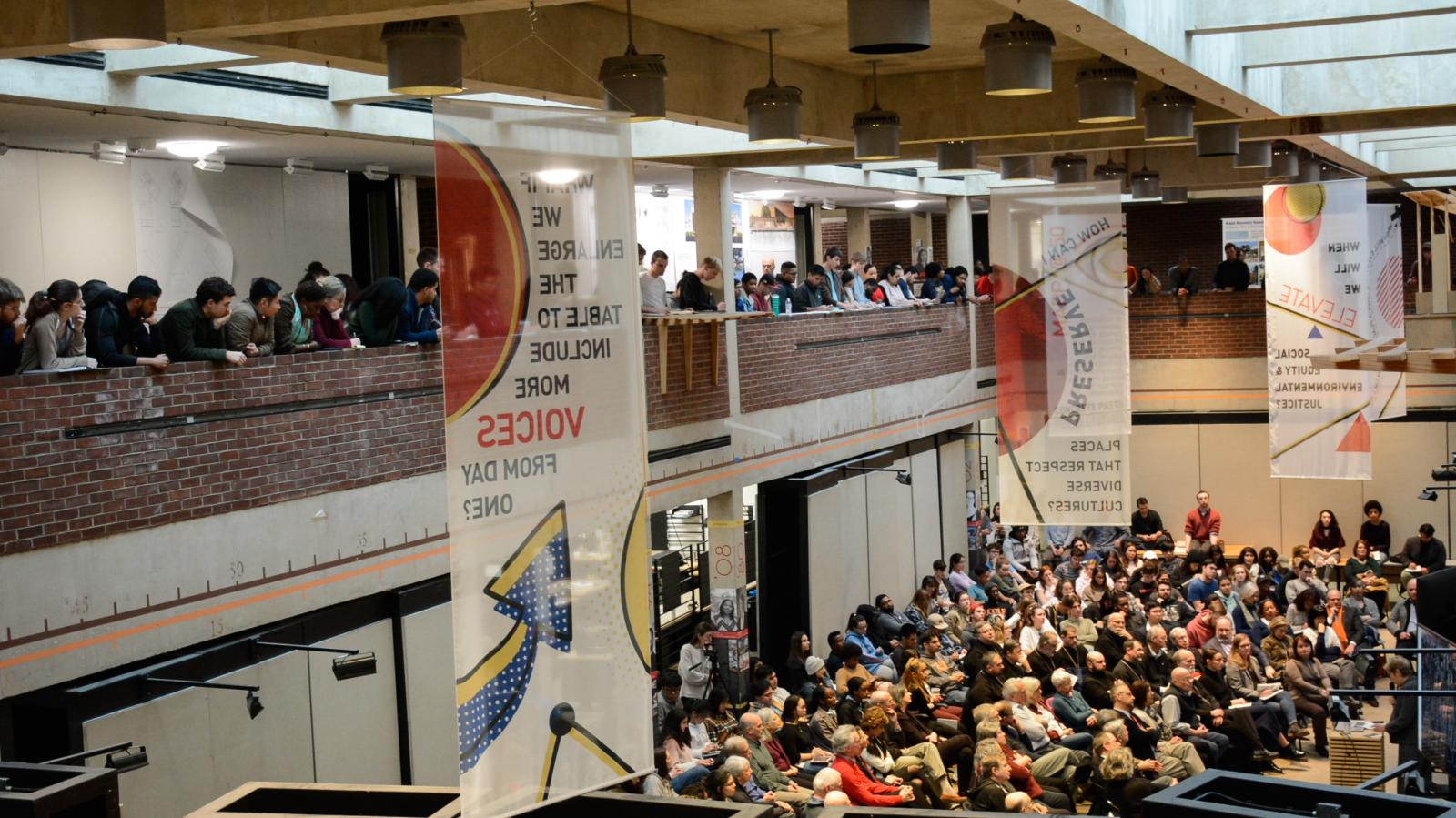 The first thing you notice are the stalks of wheat. Cast in bronze and measuring 30 feet long, the sculpture depicts a bountiful wheat field that slowly recedes into the background until it finally disappears. The stunning visual depicts the confiscation of Ukraine’s wheat crop by Stalin in 1932 and 1933, an orchestrated act of oppression through engineered starvation, resulting in over four million deaths. Today, it is known as Holodomor, which in Ukrainian means “hunger by extermination.”

“Making the Holodomor Memorial: Context & Questions,” which opened last night at the University of Maryland Kibel Gallery, is the new behind-the-scenes exhibit on the making of a national memorial to the famine that was kept secret by communist rulers for over half a century. The opening night gallery talk and reception hosted administrators, faculty and students from across the university along with several members of the Ukrainian community, including Ukrainian Ambassador of the United States Volodymyr Yelchenko and Archbishop-Metropolitan of Ukrainian Catholic Archeparchy of Philadelphia Borys Gudziak. Speaking to a standing room only audience in the school’s Great Space, the memorial’s designer Larysa Kurylas (B.ARCH ’80) reflected on her journey to the completed design of Holodomor and how, as a daughter of Ukrainian immigrants, the project was a meaningful intersection of her identity and practice.

“Throughout my life, my Ukrainian-American worlds happily existed side-by-side,” said Kurylas. “Never in a million years did I think that I would be involved in a project that would overlap the ethnic Ukrainian and the professional American sides of my life so meaningfully.”

“Spreading the truth is a tribute to victims,” said Ukrainian Ambassador Yelchenko. “The Holodomor genocide memorial in the heart of the U.S. capital is a reminder that people must act collectively to ensure that the world will never allow such injustice to happen again.”

On view through July, “Making the Holodomor Memorial” also explores questions surrounding how we mark loss and construct truth through lasting monuments of remembrance. Touching upon national and international examples, including the 9/11 and Oklahoma City memorials, the immersive exhibit shows the complex, interdisciplinary process of building a public memorial in Washington, D.C.

“The conversation that we’re hoping to have as a result of this exhibit on one hand is about an event that was suppressed for many years,” said Professor Ronit Eisenbach, who curated the exhibit and is director of The Kibel Gallery, “But the other parts of the exhibit are the larger questions raised by this memorial and story. How do we commemorate loss? What role do memorials play in our society and what is the significance of setting aside space in Washington, D.C.? What is the impact of manipulating the truth? These are questions that are relevant today and not just relevant to this particular event.”

On April 1, 2020, the School of Architecture, Planning and Preservation will host a parallel symposium, entitled “The Politics of Memory & Place,” exploring the scope and diversity of memorials in Washington, D.C., and why they are built. Speakers include Anne Applebaum (Pulitzer Prize winner and author of Red Famine, writer for The Atlantic), Roger Lewis (architect, planner, columnist for the Washington Post), Paul Spreiregen (Professional Adviser for the Vietnam Veteran’s Memorial Design Competition) as well as UMD faculty from Architecture, History, Journalism and Art History & Archaeology, including  Sarah Cameron (The Hungry Steppe: Famine, Violence and Making of Soviet Kazakhstan), Christopher Hanson and Tess Korobkin.

More information on “Making the Holodomor Memorial,” including gallery hours and surrounding events, can be found here.