Examining a School’s Past to See Its Future 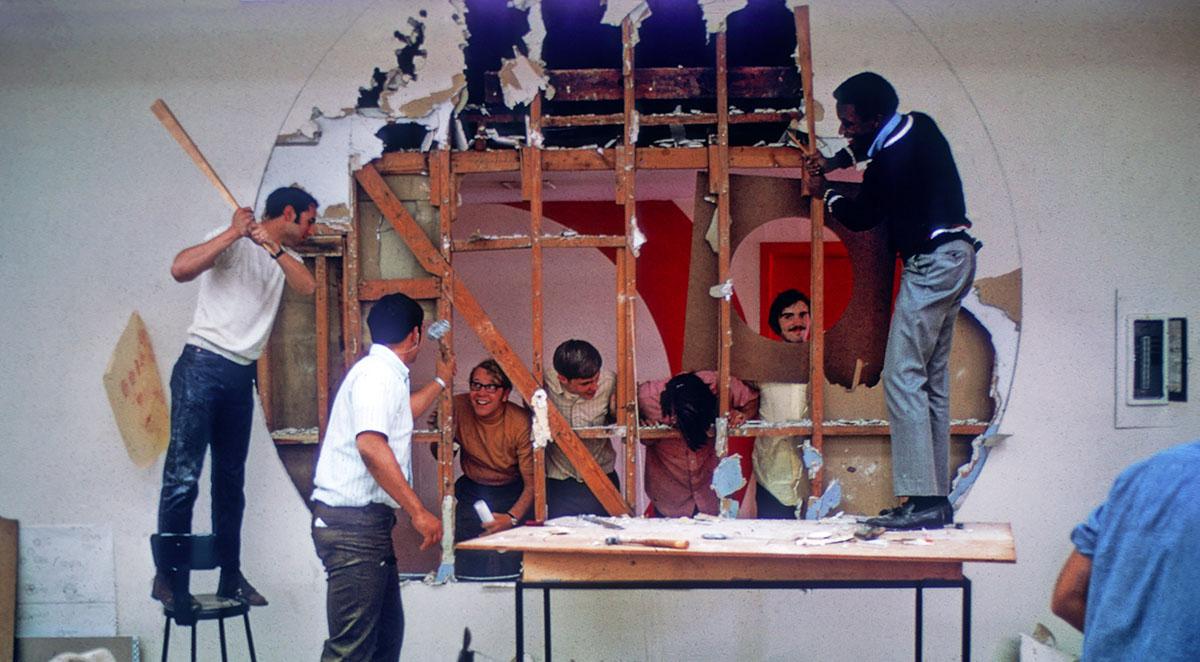 Image Caption
Students from the class of '72 deconstruct a wall in building DD, the original home of the Architecture Program, in 1968.

A lot has changed since R. Lee Hornbake sealed a deal with Maryland lawmakers in 1968 to launch the state’s first professional architecture program at the University of Maryland. What began as a fledgling undergraduate program of 4 faculty and 20 students—only two of which were women, and all of them white—is now a comprehensive undergraduate and graduate program serving a diverse student body numbering in the triple digits. Since then, the school has grown from one program to five—adding urban studies and planning, historic preservation, real estate development, a PhD program and countless master’s level dual degrees—making it a hub for studying the built environment.

But what hasn’t changed since MAPP’s founding is the mission shaped by those first faculty: a pedagogy that balances theory and practice while being grounded in cultural and social relevance; a commitment to experiential learning tethered to the social and environmental issues of the time; and a forward-thinking vision for the school’s future.

Looking ahead—while leaning on the foundation of the past—was the subject of "Origins and Futures," a conversation between Assistant Professor Georgeanne Matthews and Professors Emeriti Roger Lewis, FAIA and Ralph Bennett, FAIA LEED AP. Kicking off the 2022 Architecture Lecture Series, “Origins and Futures” offered a snapshot of the founding and iterative tenets that guide MAPP’s curriculum, sprinkled with a behind-the-scenes look at how the school came to be: from its start in temporary WWII barracks and its short-lived school coffee shop to the advent of computers and evolution of studio. Lewis and Bennett reflected on the influences that shaped the original pedagogy and set it apart from other traditional programs, many of which endure and influence the holistic curriculum of today. They reflected on the school’s ambitious spirit and penchant for service, first seen in Professor John Wiebenson’s Resurrection City, a student-built housing project on the National Mall during Martin Luther King’s Poor People’s March on Washington.

“The goal was to raise awareness of poverty in the United States,” said Lewis. “What’s interesting is we are still trying to address the same problem in 2022.”

As discussion shifted towards the school’s future, the audience was invited to join in, offering a candid conversation between longtime faculty and students about the future of curriculum and the challenges they are inheriting. Faculty reflected on their efforts to infiltrate the pedagogy with methods and modes to make sustainable design an inherent way of thinking and become second nature. While students asked about plans to integrate more technical work and structures opportunities into studios, some students also challenged being charged as “the future” for fixing the problems made by previous generations, specifically climate change. Bennett, who has taught at the school for 45 years, explained that it’s not a charge but, rather, an iterative, generational reality.

“We don’t impose this; it’s inevitable,” said Bennett. “It’s as inevitable as my leaving and you are coming, and you are the profession of the future. It’s a fact; it’s not an imposition.”

The lecture offered an important takeaway for students, said Professor Matt Bell, FAIA, in that the values built at the school’s founding, and that have endured and strengthened in its growth, will help them be thoughtful changemakers in an evolving world.

“The world will change, but the stands you make as designers are not based upon trends, they’re based on what you’ve learned to be true in terms of building a better world at a bunch of different scales,” he said. “I think these gentlemen have been a big reason that sort of ethos has sustained over time.”