Building for the End: Thesis Drafts a Plan for Truly Sustainable Building 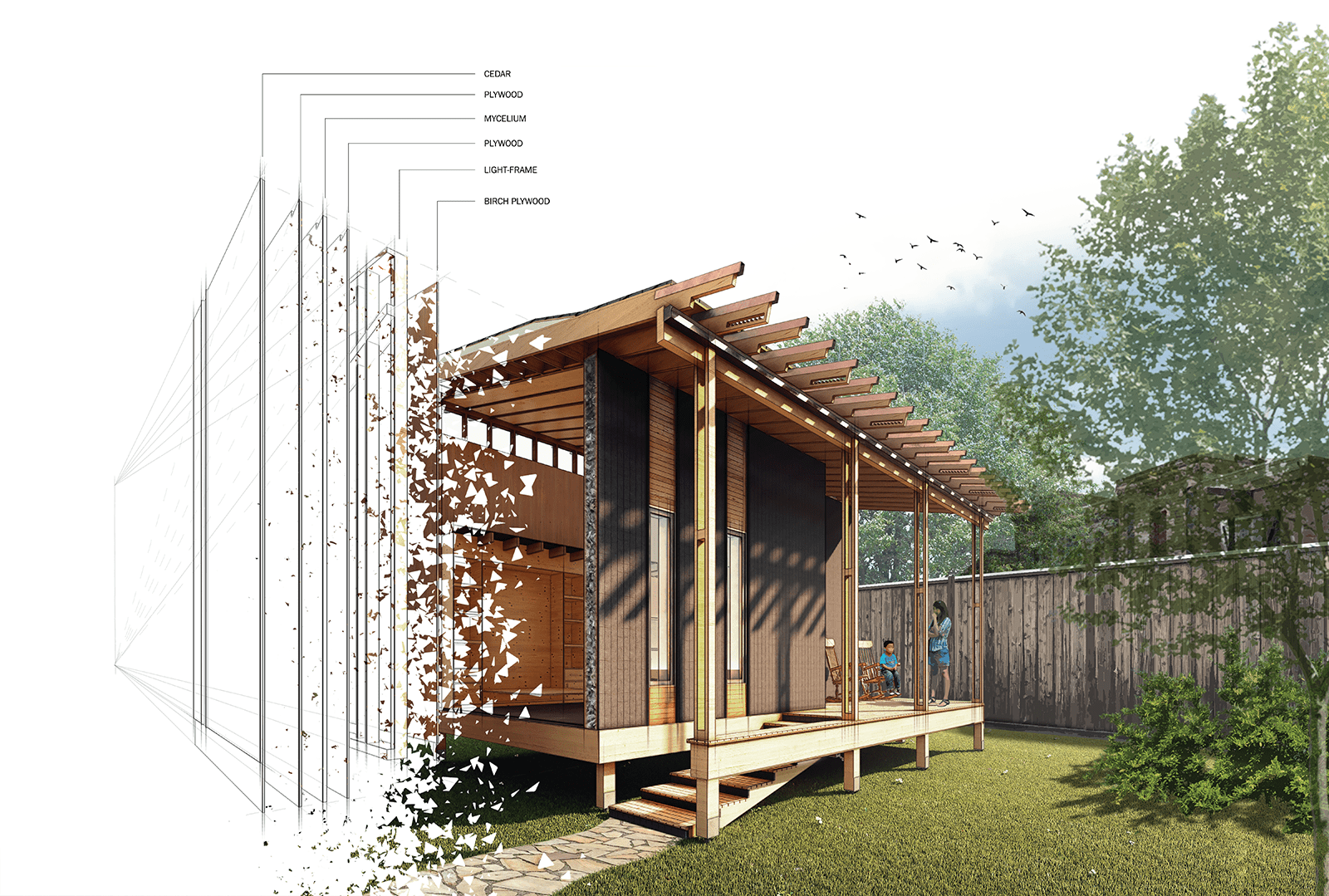 Each semester, the Architecture Program’s Design Thesis highlights innovative, often extraordinary concepts from individuals on the cusp of professional life, a precursor to the indelible architecture etched into our urban fabric. But what if that future included another typology—one that is the antithesis of architectural permeance and, instead, prepares for its eventual demise?

Ryan Muir’s “Dust to Dust: Embracing Entropy Through Organic Building Materials” takes the concept of sustainable design a momentous step further by offering architecture that can be reclaimed—either by nature or for another purpose—at the end of its useful life. The concept, manifested in three scales of affordable housing near The Wharf in Washington, D.C., won this year’s Thesis Prize for Design Excellence.

“I’ve always been drawn to the intentionality of material use and what it can decide in space and form,” said Muir. “It was a theory I wanted to explore—how architecture can embrace entropy—but also a necessity for the world we live in today.”

In many ways, Muir’s inspiration is a culmination of his graduate experience at Maryland, a meaningful accumulation of techniques collected through coursework, reading and hands-on application: concepts like adaptive reuse, cross-sectional design and mass timber framing, and work by scholars like Marvin Trachtenberg and architects like Carlo Scarpa.

“Ryan's project skillfully integrated many of his seminars and studios from his entire time as a master's student,” said Clinical Assistant Professor Brittany Williams, Muir’s thesis chair. “It was a microcosm of the curriculum wrapped up in a thesis.”

A departure from more traditional thesis projects, which focus on programming or site context, Muir’s project zeros in on the anatomy of the building and what he calls “designing for disassembly,” reflecting his extensive research into methods and materials both old and new. Muir consulted with faculty, architects, builders and manufacturers, developing methods that shy away from post-industrial materials like concrete, steel and plastic, which can take centuries to decompose and that produce high levels of carbon across their lifespan.

“It's really fascinating to see a thesis that deals with an in-depth study of materiality, detailing and architectural expression, and the impact of the building process on the environment,” said Williams.

Timber framing and traditional joinery methods comprise Muir’s light-frame walls, eliminating the nails that would prevent composting of the wood down the line. Polystyrene foam is replaced by mycelium, the organic root structure of fungi and a highly effective insulator. Throughout the design is consideration for native materials and embodied carbon; most materials are sourced within 200 miles of his Washington, D.C., site. Muir agrees, there is irony in the fact that the future of sustainable building design may be rooted in the past.

“There has been a resurgence of timber for high and mid-rise mass construction,” he says. “Articles on that have been written in irony, because it’s far from cutting-edge.”

While this thesis marks the end of Muir’s graduate degree, he says it is just the beginning of his exploration into sustainable building design, one that he hopes to pursue after graduation at Gensler in Washington, D.C.; the firm offers grants through their research institute.

“It’s a grand experiment but one that holds so much potential for the future of design,” he says. “I feel like I’ve learned so much and still have so much more to learn.”

The School of Architecture, Planning and Preservation’s final projects—from thesis to capstone—demonstrate the knowledge and skill acquired during each student’s graduate experience, manifested in imaginative and innovative concepts. See more projects from the class of 2022.