An Assault on Architecture to Target a People 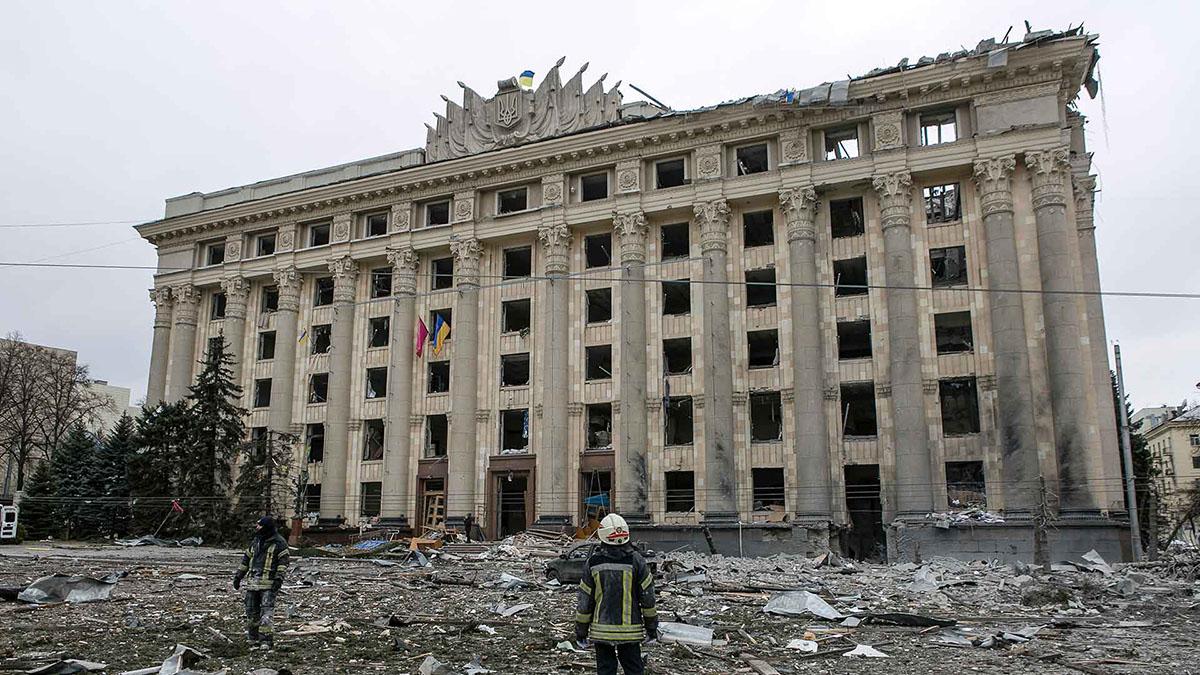 Image Caption
The regional state administration building on Freedom Square in Kharkiv, Ukraine, stands in ruins March 1 after the bombing of the city by Russia. Photo courtesy of Pavel Dorogoy/Associated Press

A few days after fighting in the Syrian civil war ripped the millennia-old minaret off the Great Mosque of Aleppo, Syrian blogger Amal Hanono published an elegy to the symbolic piece of skyline, now absent.

“They say that people make their cities,” she wrote in 2013. “But if you are from Aleppo, one of the oldest cities in the world, the city has made you much more than you have made it. So, when pieces of our history are destroyed one by one, pieces of us are lost, fragment by fragment.”

Now, Russian missiles and bombs are reducing important structures in Ukraine to rubble. It’s the latest example of how the architecture that defines a people’s history, achievement, influence and community has, for centuries, been a target for destruction, a treasure to be taken, and a statement of resilience.

“Architecture is by no means more important than human life,” said University of Maryland architecture Professor Matthew Bell, who is writing a book on the rebuilding of cities after catastrophe. “But I think it helps us to understand the tragedy of the situation when we understand the places that these people inhabit, the lives they lead there and the history that they embrace.”

Bell and two other faculty members from the School of Architecture, Planning and Preservation—Associate Professor Michele Lamprakos and Lecturer Khamal Patterson, an attorney and expert in cultural heritage preservation—offer insight into the volatile relationship between built heritage and the atrocities of war that continues in Russia’s three-week-old invasion of Ukraine, in the Middle East and elsewhere around the world:

Destroying built heritage is a war tactic thousands of years old. Lamprakos, who has conducted extensive research in Yemen and Syria, uses Hanano’s post in her graduate seminar, “Destruction, Memory, Renewal,” to show how architecture transcends religious and historical meaning to become a beloved marker of place. “When you destroy iconic religious and cultural sites, you’re destroying history and identity,” Lamprakos said. “Sometimes an entire city and its memory are erased, like the Romans famously did at Carthage in the 2nd century BCE.”

The toll reverberates beyond ornate temples, palaces and monuments. Treasured architecture, said Lamprakos, includes public parks, historic neighborhoods, even engineering marvels like bridges and dams. In 2015 Saudi-led airstrikes in Yemen hit not only civilian targets, but iconic cultural sites, including the famous gingerbread-style tower houses of the cities of Sanaa and Saada. “Heritage is not only individual monuments, it’s also the everyday landscape of people’s lives and collective memory,” she said. “Destruction tears the fabric of community.”

Destruction can happen under the pretense of preservation. While missiles can tear through a city’s cherished places in seconds, buildings can also disappear quietly after the fighting stops. After the Russia’s annexation of Crimea in 2014, Russian “conservators” systematically stripped irreplaceable tiles and architecture from the Kahn’s Palace in Bagçesaray, a sacred structure to the Crimean Tatar people. Many of the artifacts made their way into the homes of collectors, said Patterson, an attorney for the cultural heritage nonprofit ARTIVE. “It’s those architectural elements that made the palace unique and worthy of inclusion on the UNESCO World Heritage List,” he said. “This deliberate destruction puts that designation in jeopardy.”

A city’s rebirth can be a political statement. In the closing days of World War II, the German army, acting under Hitler’s orders, systematically leveled most of the Polish capital, Warsaw, including its most historically significant places, as part of a failed bid to eliminate Polish culture and national identity. After the war, Poles used historic drawings, even classical paintings, to painstakingly reconstruct the historic center to reflect its heyday centuries earlier. “They wanted to show the Germans that no matter what they did, they couldn’t eliminate Warsaw,” said Bell. But rebuilding efforts can also reflect new realities, as when Kyiv’s city center was destroyed in 1941 by retreating partisans as Nazi troops arrived. Many buildings seen today on Kyiv’s main street, Khreschaytk, were not reconstructions but reflect the design principles prevalent during the rule of Soviet leader Joseph Stalin.

Cultural experts and civilians can track important places during times of war. Organizations such as the Cultural Heritage Monitoring Lab, which is actively mapping endangered sites in Ukraine, play an important role in documenting built heritage, but people on the ground have access that those experts do not. In Syria, Yemen and elsewhere in the Middle East and Africa, local experts and communities have defended heritage during civil strife, said Lamprakos, risking their lives to do so. A proposed project by ARTIVE and the Arc/K Project, led by Patterson, will train local Syrians to integrate key architectural features and built heritage captured with camera phones with 3D modeling technology, creating a repository of built and cultural artifacts. “Access and time can be real obstacles for professionals in the documentation field,” said Patterson.

Conflict can give new meaning to existing places. Kyiv’s Maidan Square became a symbol of its fight for democracy, with memorials to those killed in the 2014 democratic uprising. Closer to home, the transformation of 16th Street in Washington, D.C., to Black Lives Matter Plaza offers an example of rebirth. “We should never forget the power of public places in our cities,” said Bell. “They are places we gather, celebrate, talk and protest, shaped and made important for our cultures.”