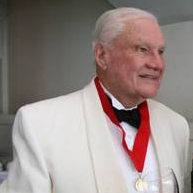 Many of us know about David Fogle’s tenure at the University of Maryland in the department of architecture and his dedication to the preservation of historic buildings. Many of us at Ginger Cove have seen his film about the saving of Kiplin Hall in Richmond, England...the ancestral home of George Calvert, the first Lord Baltimore, founder of Maryland. However, in his earlier life, David spent time in South America and on an Indian reservation in Nevada.

It all started after he graduated from Princeton and headed west to earn his masters degree in city and regional planning at the U. of California, Berkeley. He wanted to “save the world” and decided one way of doing that was to engage in planning. Part of his curriculum was a summer internship with the Santa Cruz, California city planning department. After graduation, he answered the call of the Governor of Kentucky who sent letters to about 20 natives who had left the state for their education. Come home and help your fellow Kentuckians. Thus, David found himself working for the Economic Development Department in the Central Kentucky area. He lived in Lexington (horse and bourbon country) and worked with area towns on planning and zoning use.

While at Berkeley, he had a professor in Urban Planning who had written about the cities of Latin America. Calling David, the professor asked if he would like to go to Chile! In 1960, that country had experienced a catastrophic earthquake, measuring 9.4 (See adjoining photos). David found himself in central Chile, in the city of Valdivia, populated by native Chileans as well as a German population who had arrived as a result of World War II. David has become an officer with USAID, had a top-secret clearance, and was tasked with developing a plan for the waterfront area devastated by the quake. It actually was a tsunami and residents described a 30-foot wall of water rushing up the river. There was enough warning to save lives but the waterfront area full of restaurants, marinas and shops was wiped out. Six feet of water covered an area that extended 100 yards back from the waterfront. To qualify for Inter-American Development Bank financing, the city had to have a design plan before it rebuilt. Working with a representative from the Chilean Department of Public Works and the Valdivia Director of City Planning, the three professionals pictured at left (David representing USAID) spent two years developing the design. Approved by the city council and funded by the bank, the rebuilt area featured a huge outdoor market and a waterfront park. There were no buildings. The success of their design was validated years later when a subsequent earthquake engendered little damage. David returned to Valdivia in 2010 and saw firsthand the success of his plan. He also had a reception for those who had worked with him back in 1962.

Returning to Kentucky, David worked again in planning, taught a course at the U. of Kentucky, and then began working for the Kentucky Research Institute. One of their contracts was with the Bureau of Indian Affairs. Thus David spent three months creating a plan for the Paiute Indian tribe in Nevada to develop 475,000 acres on Pyramid Lake. The tribe had no income source and anglers came freely to the lake for cui-ui, a prehistoric catfish. The proposed design included a waterfront lodge, sale of fishing licenses, and a regular tourist show of dances at the dance hall/store. Because of the teaching of a former missionary, the dance actually resembled the Virginia reel rather than a Native American one! The new plan was executed and produced a steady income for the tribe.

David's next project took him to Rio de Janeiro, Brazil in 1966, again with the State Department as a representative of USAID. The U.S. was the only embassy that had not moved to the new capital, Brasilia; we were waiting for the Brazilian Foreign Service to move there. However, there was a need for some quarters in Brasilia so several pre-fab buildings were erected. When there was a need for additional space, a new pre-fab was added. As the only architect, David supervised whatever needed to be constructed.

He also developed a friendship with the charismatic mayor of Sao Paolo, and worked with the city’s economic development staff to create a plan. It had never had one. David helped monitor a $4 million grant to Mayor Faria Lima to pay the Leo Daley Company, the contractor. A side story to David’s three years in Brazil involved the weekly open house given by the U.S. Ambassador. People were invited once, and once only – except for David. At his first invitation, he noticed the Ambassador’s wife was stuck in the receiving line for the duration of the party. He asked her if he could get her a drink; she was grateful for his service and made sure he was invited every week!

His final interaction with USAID was an invitation to spend time in Vietnam overseeing the reconstruction of cities after the war. He decided to decline the offer and, in 1970, moved to the University of Maryland as Associate Dean and Professor in the School of Architecture, and thus began his career in historic preservation. However, he retains vivid memories of his earlier life. An internet search discovered a 1963 article about David in the Louisville, KY Courier-Journal that stated, “He belongs to a growing group of young Americans whose technical skills have taken them to the ends of the earth.”