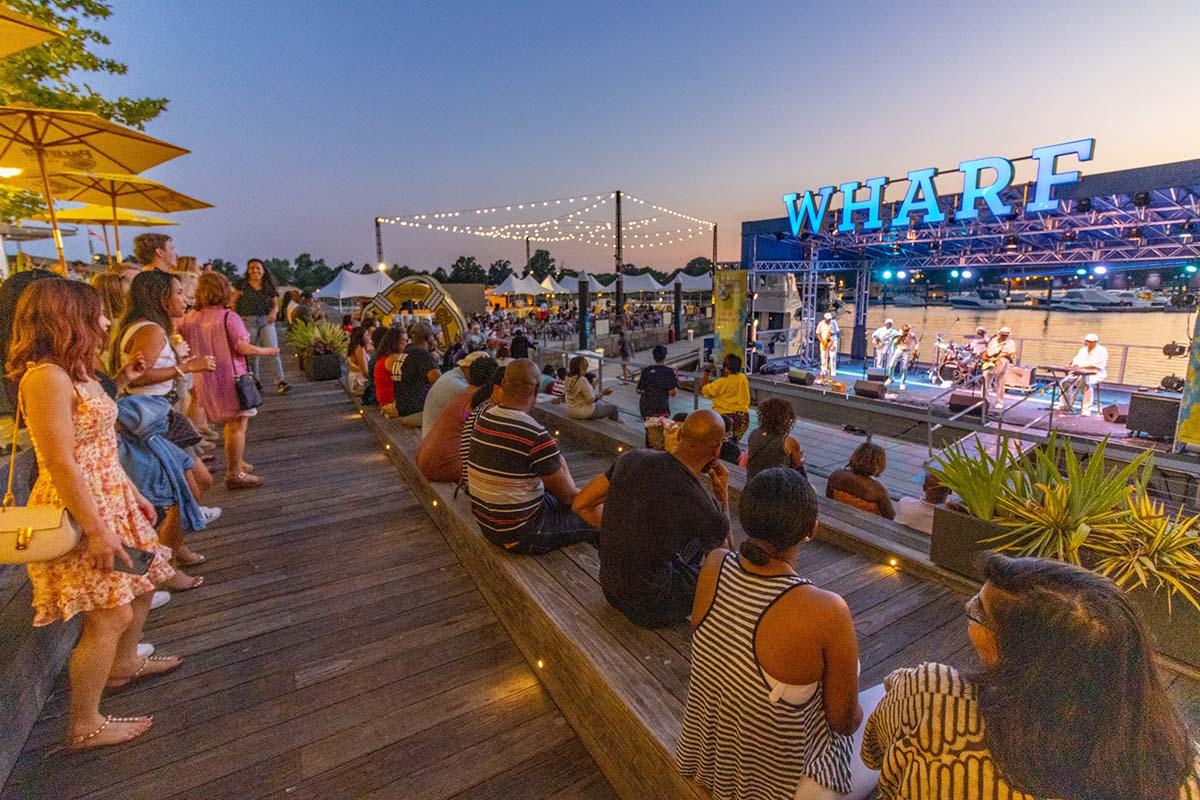 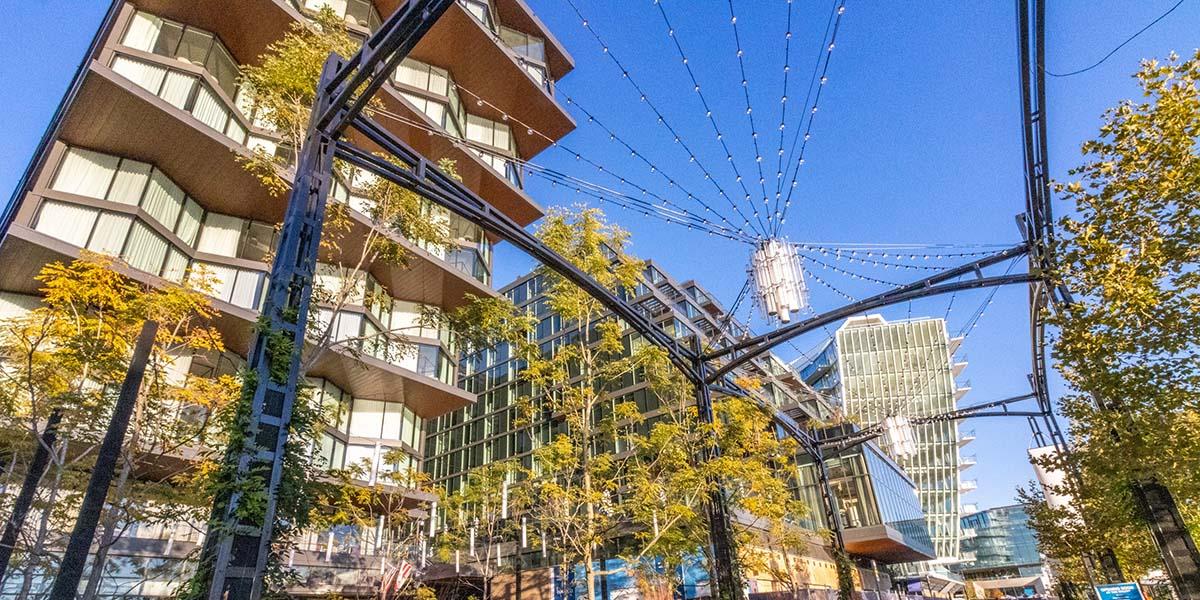 Few things are as sumptuous as cozying up in a waterfront Adirondack chair with a cup of hot coffee and taking in the view. That this serene scene is within walking distance of the urban bustle of the nation’s capital is just one reason the Wharf is suddenly must-see D.C.—and one of the many design touches that University of Maryland architecture alums Martiena Schneller ‘08 and Matthew Steenhoek ‘05 hope bring people to the city’s vibrant new neighborhood.

“It brings your blood pressure down about 30 points,” said Schneller, Hoffman & Associates’ senior vice president of design, who along with Steenhoek helped lead the teams that brought the vision, design and development of the Wharf to life.

Today, the revitalized community in Southwest Washington boasts nearly 50 eclectic restaurants, three music venues, three hotels, retail, waterfront living, a marina and office space round out the mile-long stretch along the Washington Channel (which runs parallel to the Potomac River), stitched together by a series of green spaces, a promenade and wood-clad pier. More than 7 million people visited the area in 2021, before the second and final phase of development opened in October.

The vibe has dramatically changed from 2006, when the Washington development company won the bid to reimagine the 27-acre waterfront parcel and 49 acres of Washington’s Channel. Home to the nation’s oldest operating fish market and the largest community of “live-aboards” on the Eastern Seaboard, the Wharf was otherwise an afterthought, awash with sunken parking lots and low-slung buildings that hampered views and access to the water.

The Wharf’s future, conceived by Steenhoek and his team (in his first professional undertaking out of graduate school), was the culmination of conversations with residents, city officials and the master planning team: a tapestry of experiences that celebrates a unique location, reflects the city’s commitments to sustainability and local hires, and creates value for the neighborhood. The team’s vision is manifested in the eclectic facades lining the waterfront today, built over 12 years and devised by a collective of architects and landscape architects led by Schneller; each building and stretch of green is the imagination of a different designer. Ground-floor storefronts were framed, but retailers were given design control (and funding) to express their brands through creative, often whimsical design. The individual details coalesce to create a feeling that changes as visitors walk from the frenetic fish market—an iconic, updated community resource—to the peaceful waterfront park.

“We wanted it to feel really organic,” said Steenhoek. “Walking down the promenade, we wanted visitors to experience a changing scene that’s part of the cadence of a city, where long walks feel short because they’re interesting.”

Most designers don’t get to experience the daily impact of their work; but with Hoffman’s offices located in the heart of the Wharf, Steenhoek and Schneller regularly witness moments of joy, from office workers enjoying a lunch break to marriage proposals and birthdays.

“I like to think they could have celebrated these major life events anywhere in the world and they decided to come to a place I had a small part in making,” said Steenhoek.

Just 45 minutes from UMD’s campus by Metro, the Wharf might be the perfect excuse to head downtown. Here’s how Schneller and Steenhoek would spend a perfect afternoon:

Pack a picnic lunch and head to the Green: This series of pocket parks is tied together by a central water feature, constructed of the same Vermont marble used in Arlington National Cemetery. The tall, stacked structure was furnished with pieces Schneller’s team found in the quarry’s throwaway pile. “We took something they considered trash and had it shaped to create this really tranquil space among the city,” she said.

Hit the links or the rinks: In the colder months, lace up and enjoy the Wharf’s waterfront ice rink. From March to December, you can take a free boat ride from the Wharf to East Potomac Park to play a round of golf at the nation’s oldest continuously running miniature golf course.

Take a big swing on the Seventh Street Pier: The Wharf’s wood-clad boulevard to the water is outfitted with multiple adult-size swings for reliving the childhood delight of being airborne, said Steenhoek. Grab a s’mores kit and warm your hands at Camp Wharf’s rustic fire pit when the temperature dips.

Don’t miss the sunset: As the sun begins to set, grab a spot along the promenade near the Amaris, a curved condo building wrapped in cold-warped glass; as the sunset creeps down the Washington Channel, its reflection off the building creates a spectacular fiery glow, said Schneller.

Dinner and drinks at any price: From $4 falafel to $400 champagne, the Wharf’s dizzying array of provisions fit every budget—and ensure students can make a day trip that doesn’t break the bank.

Rock into the evening: Home to the Anthem, Pearl Street Warehouse and Union Stage—not to mention regular, free outdoor concerts—there is no shortage of live musical thrills at the Wharf. Need a more subdued ending? Take a seat in a rocking chair along the promenade.