A Witness to History 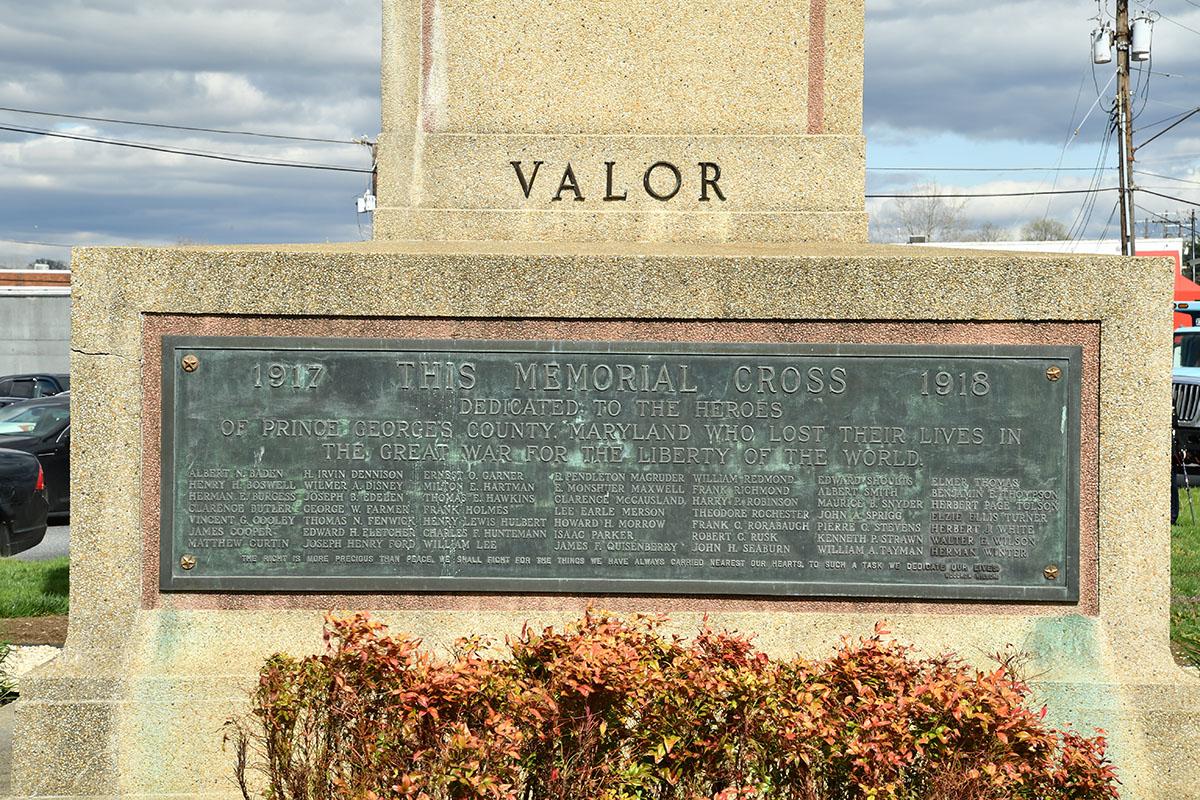 Depending on who you ask, the Bladensburg Peace Cross is a memorial to Prince George’s County men who gave their lives during World War I, a handy geographical marker at a confusing intersection, or a lightning rod in the debate over separation of church and state that went all the way to the Supreme Court.

University of Maryland student Joe Tannir, however, has found that that the statuary’s significance extends even beyond all of that—as a reference point to a nation’s growth, changing economies, environments and social norms, even demonstrations of civic pride.

While much has been written about the 40-foot-tall monument located 3.5 miles down Baltimore Avenue from the university, its history is scattered. So this semester, the Maryland-National Capital Park and Planning Commission (M-NCPPC) asked UMD’s Partnership for Action Learning in Sustainability (PALS) program—to help it develop a coherent story for the county’s future programming.

“It’s a touchstone for understanding so much of what was going on in the area,” said Tannir, a dual historic preservation and architecture major who led the work. “Telling its story is a way to track changing technologies, economies, even social commentary over time.”

The Peace Cross is not what its architects originally envisioned. The campaign to create a memorial for the 49 fallen soldiers of World War I in Prince George’s County coincided with a much more functional lobbying effort: paving what is now Route 450, a well-traveled mail route between Annapolis and Washington, D.C. that was notoriously subject to mud and bad weather. The first newspaper article mentioning what would become the National Defense Highway painted images of Roman triumphal arches bookending the stretch of road—one for marines and sailors in Annapolis and one for soldiers in Bladensburg.

Why the plans were scrapped isn’t known, but they were soon replaced with a Calvary cross, which Tannir explained is similar to the roadside crosses found in Northern France where many of the men would have fought. The memorial and the highway were a package deal of sorts. The government funded construction of the improved route to transport oysters, produce and tourists between Annapolis and the U.S. capital, while an aggressive grassroots effort by area stakeholders such the Prince George’s County Memorial Committee, families of the fallen and the American Legion local Snyder-Farmer Post—including a vaudeville show at one point—paid for the Peace Cross. It was unveiled in 1925.

For nearly 100 years, the Peace Cross has continued to serve as both a geographical and societal orientation through time. It was a fixture in 20th century civics classes and continues to be the destination for hundreds of parades and patriotic celebrations.

Flooding in the first half of the 20th century around the Peace Cross—the result of bourgeoning regional development—helped prompt the construction of a vast network of culverts and levees across the county that became the Anacostia Tributary Trail System, a popular recreational draw.

Tannir said that lawsuits of the 21st century centering on its religious implications, arguing that a Christian symbol on public land violates the First Amendment’s establishment clause, reflect a changing society in which the memorial’s meaning is increasingly open to debate.

According to Historic Preservation Director Dennis Pogue, the Peace Cross is a terrific example of the massive community groundswell around civic commemorations, a practice that began with the deaths of Jefferson, Adams and Revolutionary War veterans in the 1820s and that accelerated after the Civil War.

“We were a different country back then, and this type of celebratory memorialization was really huge,” said Pogue. “That’s one of the revealing things about the Peace Cross. It relates back to this earlier era when we emulated public civic pride in a very different way. The Peace Cross is sort of a remnant of those ideas.”

Tannir’s report will be shared with M-NCPPC in May, which it hopes to use in creating digital interpretive programming for the public. The Peace Cross project is one of 20 PALS projects under way this semester, pairing students and faculty with county and state agencies to tackle sustainability challenges, from food production in Prince George’s County to tracking trash in Patapsco State Park.

Despite the pomp and circumstance, the project was ultimately a very practical one, said Tannir. The Peace Cross and the adjoining highway project offers an early narrative of the state and federal collaboration required in the early 20th century to build our country’s highway system; paved roads in that era were a novelty, and stakeholders needed a way to convince people they were a necessity. In the end, an injection of pious patriotism literally alongside the new road helped win hearts and minds.

“It really is intrinsically connected to the roadway, but in this case, I think there was an interest in making the infrastructure more processional than just getting from A and to B,” he said.