When a Movie’s Scene Stealer Is the Scene Itself 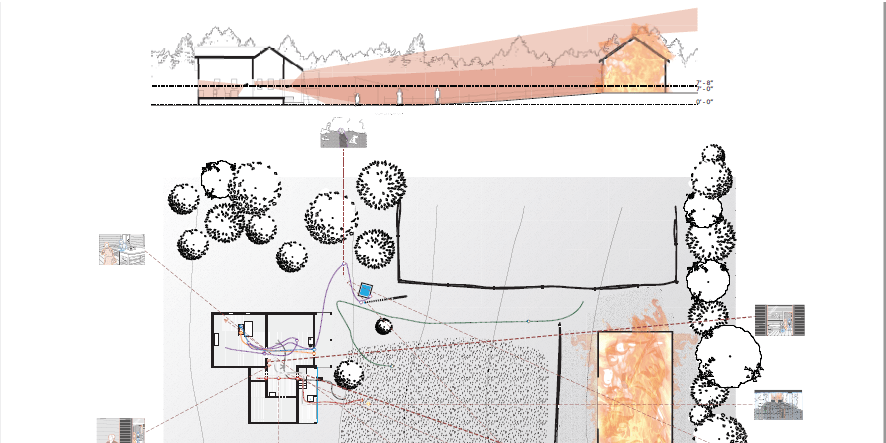 Most cinephiles agree that Jimmy Stewart’s portrayal of a man in a wheelchair held captive by his apartment—and his own devices—stole the show in Alfred Hitchcock’s masterpiece, “Rear Window.” But architecture Professor of the Practice Peter Noonan offers a different take: one where the claustrophobic quarters of urban apartment living literally build the suspenseful plot that makes the 1954 film required viewing.

Bucolic suburbia, a postapocalyptic city and a childhood home are just some of the settings that earn top billing in Noonan’s popular design seminar, “Architecture & Cinema: Place + Film,” where via settings in celluloid, he challenges students’ perception of place and how we inhabit it.

Through the reels of 28 films—from the dystopian black comedy “Brazil” to the sublime “Lost in Translation”–students explore how directors navigate and use built space to create a story, elicit emotion and create atmosphere. It’s a craft, said Noonan, that closely mirrors their future role as architects.

“Film is a fairly new medium, a little over 100 years old, but we’ve been making dwellings for millennia,” said Noonan. “What we film is deeply connected with how we dwell and how we live our lives.”

The class, which is offered most years since 2015, fills to its 15-seat capacity quickly, often with a waiting list. It is taken primarily by graduate architecture students, but it is open to other students with permission.

Each week, Noonan and his students consider a different theme through the lens of two cinematic classics: “Do the Right Thing” and “Magnolia” show the juxtaposition of urban and suburban life; “Chinatown” and “Bladerunner” depict the same city—Los Angeles—at different times; “The Tree of Life” and “Roma” explore domesticity and what defines home.

Noonan explained that the techniques used to make a good film are similar to those required for a good building: Examining the “long shot,” a continuously running scene filmed in a single take, helps students better understand the architectural technique of promenade, which maps the user’s pathway through a building or space. The “montage,” a sequence of short shots used to create a mood, tell a story or condense time, is very much like an architect’s technique of representation, with storyboarding and images used to convey a design idea.

Through an architect’s point of view, students in past years have broken down the terrifying tricycle ride in “The Shining,” the deceptive domestic takeover in “Parasite” and the chaotic final escape from a war-torn city in “Children of Men.”

The process, said Ken Filler ’16, has helped him think about places more spatially and consider the narrative and atmospheric quality of the designs he presents to clients, skills he has taken into his practice at Gardner Architects in Washington, D.C.

“I think sometimes we look at our buildings as objects, but in film, you’re immersed in the space through the lens of the camera and thinking about the user a little bit more,” said Filler, who took Noonan’s inaugural course. “I think we could certainly do more of that in the design process too.”

Moving Pictures: Below, Noonan outlines five notable films that are explored and discussed in the seminar—some classic, some obscure—with standout settings worthy of your next movie night:

Man with the Movie Camera (1929): This visually stunning silent documentary offers a slice of life in 1920s Kyiv and Odessa, Ukraine. “Even though it’s black and white, it feels fresh and kind of groundbreaking—like it was made yesterday,” said Noonan. “It’s an abstract kind of experimental film that makes you see the city and how we live in a city in a new way. Every time I see it, I see something different.”

Contempt (1963): From French New Wave Auteur Jean Luc Godard and starring Brigitte Bardot, “Contempt” is a film within a film, with the oceanside Italian villa Casa Malaparte serving as a breathtaking metaphorical stage for the filmmaker’s actors. “It is a beautiful and important film, whether we’re talking about film and architecture or just film in general,” said Noonan.

Wings of Desire (1987): A story of invisible, immortal angels who make their home in Berlin during the Cold War, the film depicts “that angst of living in a divided city,” says Noonan. “It’s such an important slice of time, but it’s also a timeless film about how lives in these war-torn cities are impacted.”

Cinema Paradiso (1988): Set primarily in small Italian movie house, the film, which centers on a friendship between a boy and a projectionist, “shows the evolution of this small town but also charts the death of the square, from the ’40s and ’50s into the ’60s.”

Roma (2018): Alfonso Cuarón’s semiautobiographical tour de force tells the tale of his upbringing in 1970s Mexico City through the eyes of a young housekeeper, using a house and its characters to consider the relationship between memory and place. “When I first saw ‘Roma,’ I knew I had to include it in the film course,” said Noonan. “It’s in black and white, it’s long and slow, and happened to be the best thing I saw all year.”