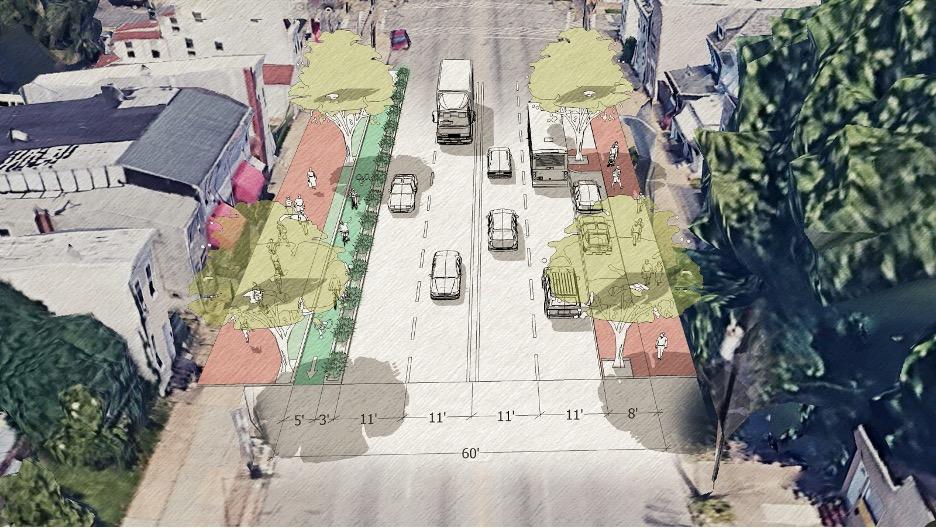 Image Caption
Brooklyn/Curtis Bay, Patapsco Avenue Proposal. The Urban Studies & Planning students propose trees and parking on one side, and a bike lane on the other side. This way the street narrows and protection is provided to pedestrians.

Lush linear parks, rooftop gardens and enhanced tree canopies implanted into cityscapes can cut greenhouse gases, improve water quality and create a refuge among blocks of concrete. But the rising housing costs and gentrification that often go hand-in-hand with such “green infrastructure” projects often mean that longstanding residents cannot remain to enjoy them.

Now, a new report from UMD urban planning students outlines a plan for “greening” urban communities through small-scale, big-impact investments that are feasible in everyday city neighborhoods. Shared this month with the Baltimore City Planning Department (BCP) and other city stakeholders, the report suggests that smaller, community-specific strategies, like “greening” alleyways or extending pedestrian trails, can provide momentum to kickstart more-equitable forms of revitalization in historically disinvested neighborhoods.

Developed in partnership with BCP and with input from over a dozen community-based agencies and organizations, the students’ report outlines physical and programmatic strategies for the revitalization of Baltimore’s “South Seven” neighborhoods (SB7).

City planners tapped the students to help organize a plan that allows SB7 neighborhoods to take advantage of what officials hope will be “Baltimore’s second Inner Harbor,” a multi-year project to redevelop Middle Branch Waterfront in South Baltimore. Located just blocks from the SB7 neighborhoods, the proposed network of parks, trails and waterfront will be spearheaded by James Corner Field Operations, the landscape architects behind New York’s High Line.

“The design firm is creating this wonderful waterfront, but what does this plan mean for the surrounding neighborhoods?” said Adjunct Professor David Rouse, who led the project. “Our objective was to find ways to connect into that.”

For decades, the SB7 neighborhoods have been hampered by economic, social and physical barriers to opportunity. The area suffers a lack of economic activity, along with a growing digital divide and physical barriers in the form of undeveloped lots, industrial plants and railways that impede access to fresh food, employment and recreation.

Green infrastructure is a key element in economic, social and environmental resilience, said Rouse, who has worked on similar projects in his work as an urban planner and landscape architect for over 40 years. For instance, trees alone can lead to better health outcomes and lower utility costs and can combat the heat island effect associated with climate change. But such projects historically have been omitted from low-income neighborhoods, particularly neighborhoods of color, he said.

To keep pace with the forthcoming development and safeguard residents from displacement, the students turned to high-impact, low-maintenance green infrastructure, which can add near-instant social capital and lead to other forms of investment.

One of the authors, urban planning student Daniela Acosta, said that, while the plan can be executed all at once, its catalog of projects can also be implemented piecemeal. Unlike large-scale investments, which require significant capital and, historically, increase property values and displacement, smaller investments in green infrastructure like small local parks or green roofs require less in start-up costs, can be closely guided by community input and are easier to maintain.

“Green infrastructure is a very sexy term, but the financing for operating and maintaining it isn’t talked about a lot,” said Acosta. “If you don’t have the resources to maintain it, the benefits are going to be short term.”

The plan’s two-part strategy is a “how-to” for targeted physical interventions and community programming, with each recommendation offering a detailed case study and a list of potential partners and funding sources.

“Our primary goal was that this plan could be accessed, not just by government entities but also neighborhood groups, to read, understand and enact small parts of it,” said urban planning student Luke Benson. “Anything proposed had to be implementable and achievable.”

Along with physical upgrades, programming would aim to boost resident health, provide job training and employment, as well as implement weatherization outreach to lower utility bills and improve home health and safety. Students also outlined ordinances, policies and other programs to ensure that existing residents reap the benefits of revitalization. For example, a first source hiring policy, designed to prioritize residential hiring, has been shown to effectively build community wealth, and community land trusts target areas that are underutilized or ripe for investment—such as abandoned properties or vacant lots—to increase and maintain affordable housing.

“It’s an excellent plan and as good as many of the master plans you see from a planning agency,” said Brenton Flickinger, southern district planner for the Baltimore Planning Department, who worked closely with the students this past year.

So far, Flickinger has shared the plan with James Corner Field and city officials, and has added it to the project website as a resource. “There are some innovative ideas in there that I hope are considered for the master plan, he said. “They are realistic and specific enough that it’s possible that they could be done.”