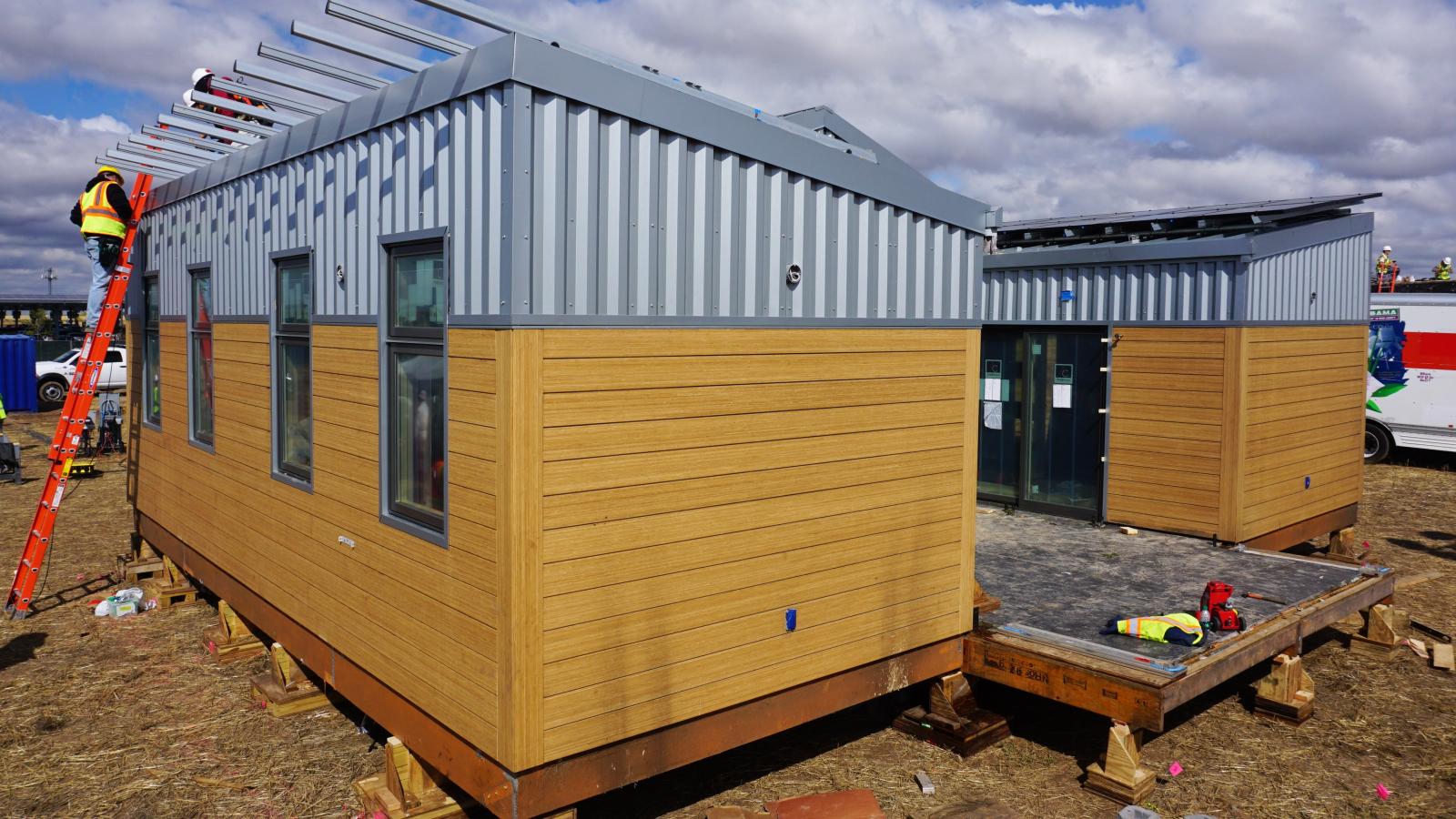 Last week, the University of Maryland’s entry for the U.S. Department of Energy Solar Decathlon 2017 was loaded onto flatbed trucks and began its 1,600-mile journey to Denver—and, hopefully, to victory. In just under two weeks, Team Maryland will debut its innovative housing prototype, reACT (which stands for resilient Adaptive Climate Technology), designed to resiliently adapt to diverse climates.

“We’re so excited to get to this milestone,” said Professor of Architecture Garth Rockcastle, who is one of the project’s principal investigators. “We’ve been working at a neck-breaking pace these past few weeks.  We’re all looking forward to the excitement of being with our competitors in the Solar Village and seeing how we compare.”

Inspired by both technology and tradition, reACT connects the indigenous world with western scientific innovations to deliver a sustainable, regenerative, almost “living” model that intends to change the way the industry approaches housing. reACT is inspired by long-held principles of Native American cultures who, for centuries, have harvested the resources of the surrounding environment while minimizing waste and impact. With the addition of cutting-edge technologies, sustainable materials and an intuitive, modular design, Team Maryland has devised a housing model that is completely solar-powered, water conservative, affordable and regenerative for diverse communities and ecosystems.

reACT goes beyond the solar-powered requirements of the Decathlon, capitalizing on the talents of UMD’s architecture, engineering and life science programs to devise several innovative features, including:

The Solar Decathlon is a biennial competition that challenges collegiate teams from around the world to design and build an energy-efficient, solar-powered house that is both affordable and attractive. The competition, which harnesses the collective knowledge of some of the brightest young minds in architecture, engineering, life sciences and technology, attracts thousands of visitors, including industry professionals, homeowners and designers from around the world. The two-year process—which spans from concept drawings to the construction of a physical house—culminates in a 10-contest competition lasting one week. This is the first year that teams are eligible for cash prizes; the first-place team will bring home $300,000.

The state’s only Solar Decathlon entry, and one of a mere 11 world-wide, reACT is the University’s fifth entry in the history of the Solar Decathlon competition. UMD took first place in 2011’s competition with WaterShed, which harnessed the power of both sun and water. In 2007, UMD placed 2nd overall with its entry, LEAFHouse.

Get a sneak peek of reACT

The principles of reACT’s living systems model—specifically, harnessing the surrounding environment and managing waste differently—are still new concepts to American building, yet have been part of the Native American culture for centuries. These principles inspired reACT’s design as well as its audience; Native Americans living in urban environments often struggle to practice their culture in a setting that’s not as closely tied to nature. reACT intends to bring that flexibility to uphold traditions held in a tribal setting to the forefront. With counsel from the Eastern Shore’s Nanticoke tribe, the team used these long-standing traditions and practice as reACT’s foundation, aligning with today’s need for environmentally-sensitive, economically-viable housing. While their prototype case study for reACT revolves around a Nanticoke couple living in an urban setting, the modular concept and self-sustaining function of reACT lends itself to a variety of environments and cultures.

“This solution is incredibly flexible and very responsive to different lifestyles no matter who you are,” said student public information officer Emma Schrantz, a graduate student in UMD’s architecture program.

Now reunited with the house in Denver, the team will have eight days to re-assemble the reACT. As past teams are well aware, the devil is often in the details, with judges looking not just at form and function, but also attractive design, market potential and comfort. Native plantings curated by life sciences and modular furniture designed by Professor Garth Rockcastle and his students will bring their concept to life.

“We could never have gotten this far without the many hands pitching in from across campus and the wonderful sponsors who have stepped up to support us in this journey,” said engineering student and student project manager W. Paige Andros. “We were so lucky to have the guidance from mentors at Whiting Turner, AIA Potomac Valley, UMD’s Office of Sustainability, Constellation Energy and more. They helped make this dream a reality.”