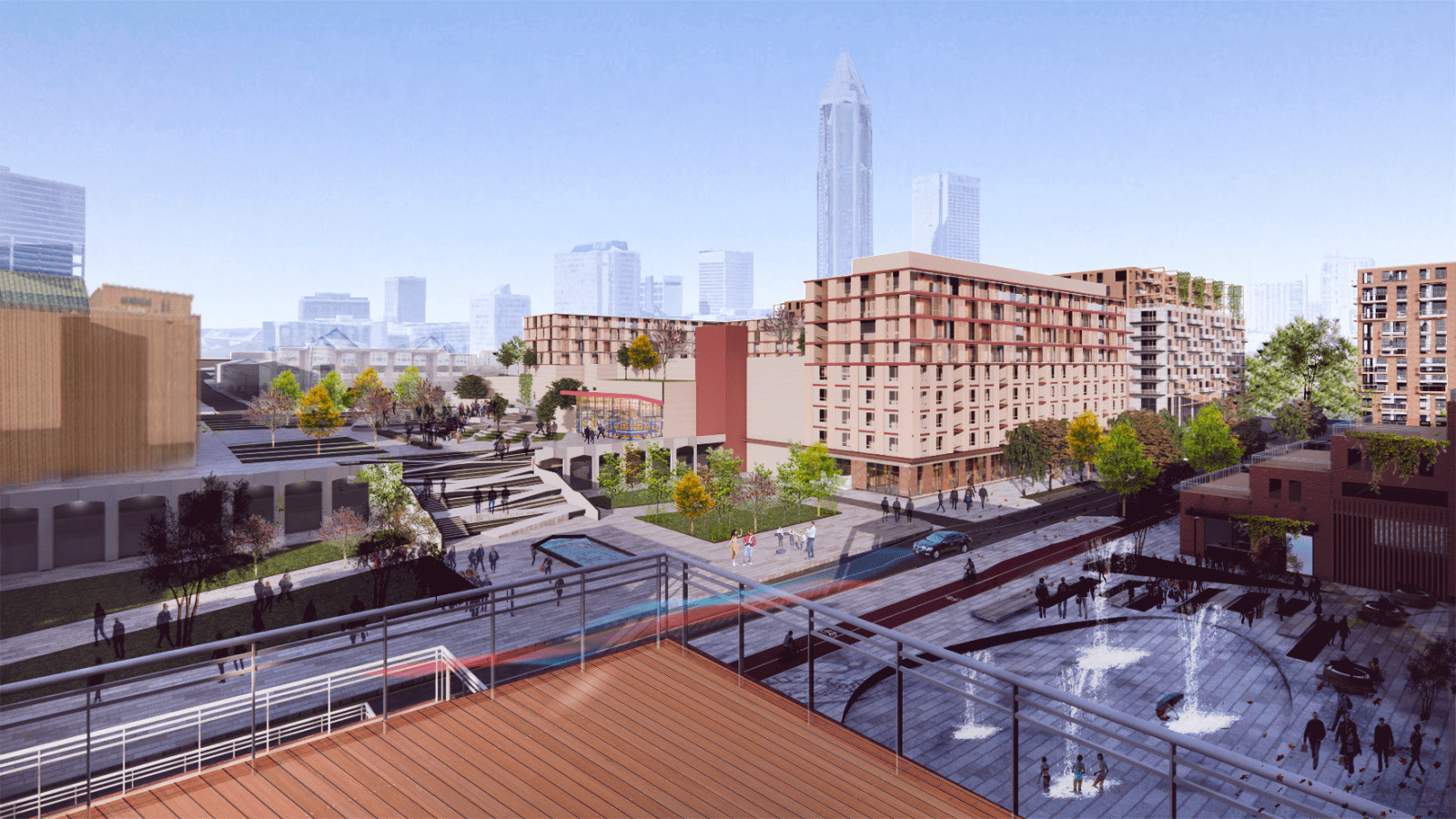 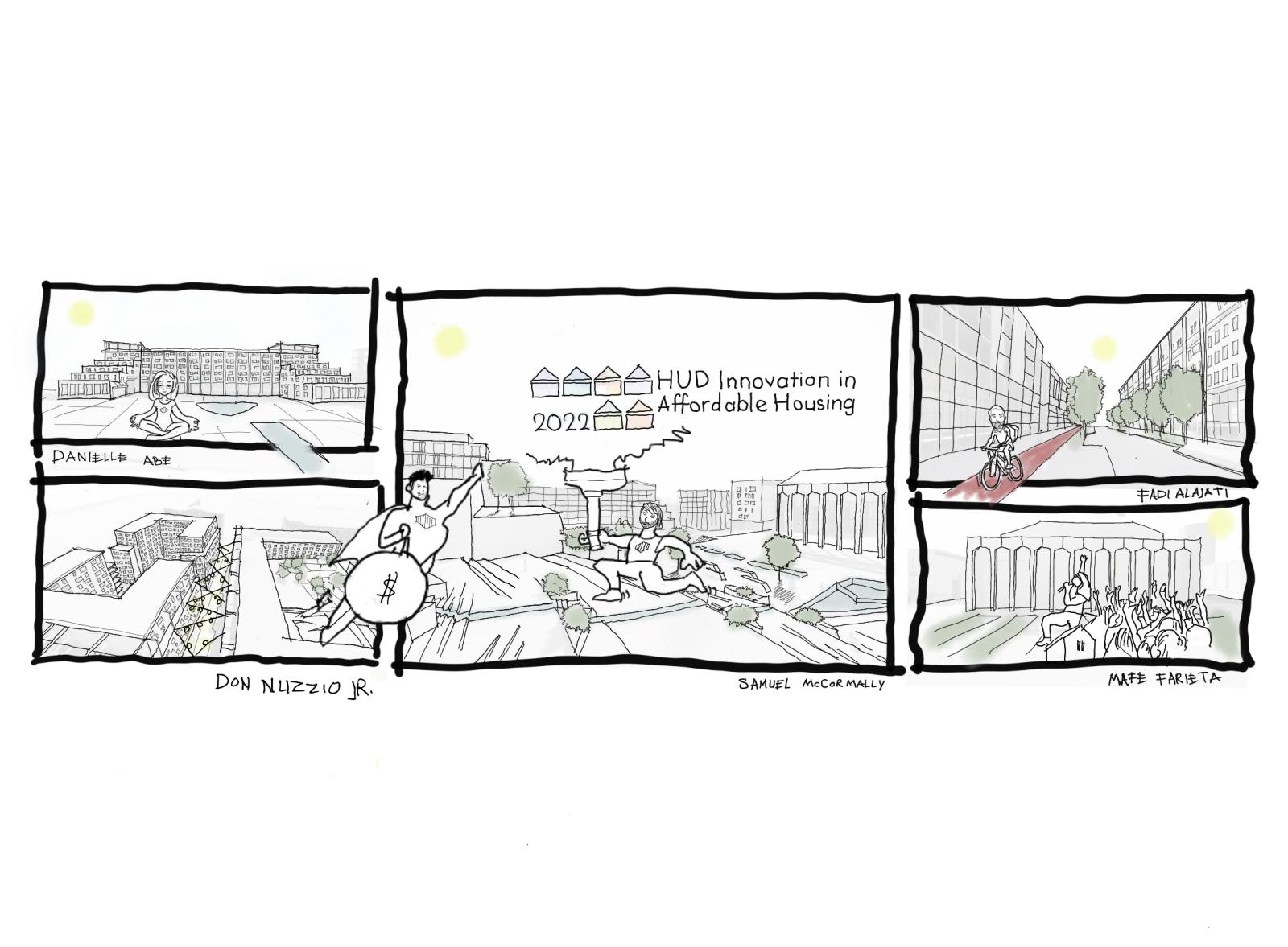 A dynamic second act for the largest performance hall in the Southeastern United States earned a team of University of Maryland graduate students top honors—and a $20,000 first-place prize—in the ninth annual Innovation in Affordable Housing Student Design and Planning Competition sponsored by the U.S. Department of Housing and Urban Development (HUD).

The team’s winning proposal transformed the site surrounding Atlanta’s iconic civic center into a dense mix of residential, commercial and cultural assets in one of the last undeveloped sections of Atlanta’s downtown. Maryland prevailed over two teams from University of California Berkeley and a team from Kansas State University in the final four presentations to HUD leadership and industry jurors Wednesday. This is the fifth time a Maryland team has advanced to the competition finals and the third time winning the competition.

“This year’s competition is definitely one of our most challenging ever,” said Calvin Johnson, deputy assistant secretary in HUD’s Office of Policy Development and Research. “These four teams have presented outstanding, forward-thinking proposals. They give me hope as we work towards HUD’s mission of creating strong, sustainable, inclusive communities and quality affordable housing for all.”

The annual faceoff challenges interdisciplinary, graduate-level teams to create innovative and original solutions for a real-world housing problem in the United States through development, design and finance. This year’s site was once one of Atlanta’s oldest Black neighborhoods, Buttermilk Bottom, demolished by the city in the 1940s to make way for the Boisfeuillet Jones Atlantic Civic Center, the largest performance hall in the Southeast, which was shuttered in 2014.

Team Maryland’s challenge was two-fold: return the area to its former cultural and civic glory and develop an adjacent mixed-use affordable community, resurrecting the historical significance of Buttermilk Bottom while envisioning a renewed and equitable future.

“The civic center is a special but complex project with great historical value to the City of Atlanta,” said Eugene Jones, Jr., president and CEO of the Atlanta Housing Authority (AHA). “There is an incredible opportunity here to preserve this history and to bring to life something new and cutting-edge that can serve those in need, while contributing to Atlanta’s vibrancy as a growing hub of creativity.”

High-density housing—almost 1400 units, more than any other proposal in the competition—offered the team freedom to design for all income levels, a priority for AHA, from very-low-income individuals emerging from homelessness to city employees, seniors and families.

“Communities around the country are faced with the enduring challenge of not just a lack of affordable housing, but dignified affordable housing that is mixed among market rate and workforce housing stock in desirable neighborhoods,” said Professor Maria Day Marshall, one of the team’s advisors, who has taken the team to the finals four times. “In the end, I think it was the housing density and superior design that made the difference in the students’ proposal. This win really demonstrates Maryland as a powerhouse in affordable housing education among universities across the country. No other university has our record.”

“An influential moment for our team was the site visit, because we got to hear about how much people cared about this place,” said team member Maria Farieta. “If it matters to the people who live there, it matters to us, and we wanted to carry that through in the design.”

Recommendations by the team, said Jones, may be incorporated into the new site design.

“We are so happy to bring back the gold for the University of Maryland, but also to have this opportunity to be part of a project like this for the Atlanta Housing Authority,” said team member Donald Nuzzio. “It will be amazing to see this project transform from a flat piece of dirt to an actual structure in the ground.”