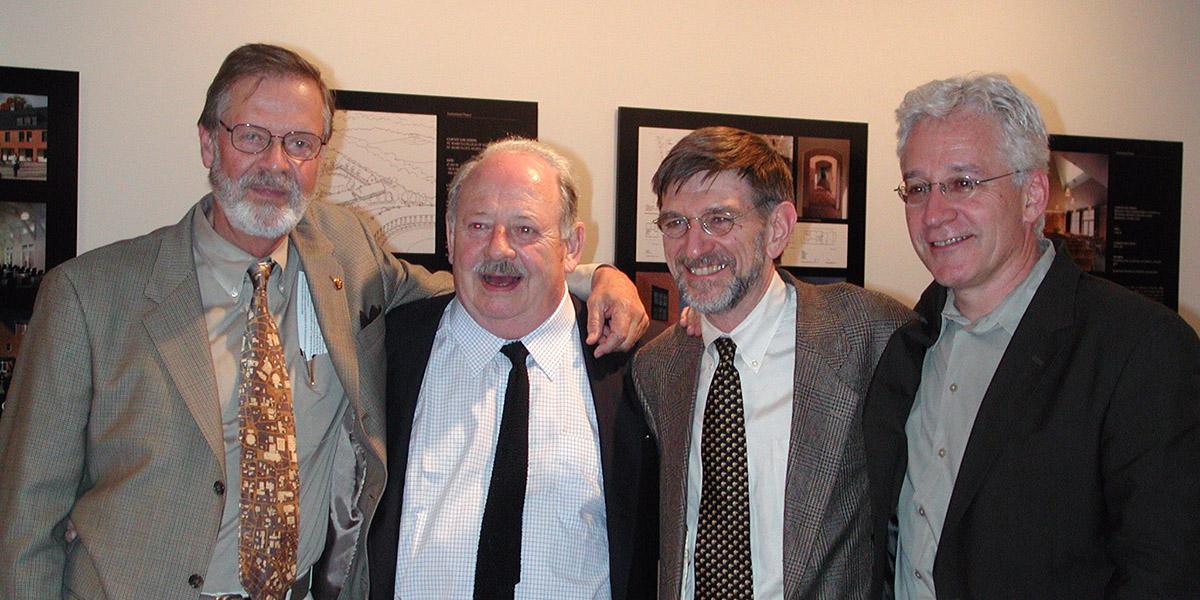 Architect, educator and second Dean of Maryland’s School of Architecture, John Steffian passed away on August 2, 2022. He was 89. A generous and affable leader of the school for seven years, Steffian played a pivotal role in establishing the school’s place both at the University of Maryland and in the region, shepherding it through growth politics and into the digital age.

“John was an incredibly generous, funny and convivial leader,” said Professor Emeritus Ralph Bennett, who said it was a “great privilege” to keep his seat warm as interim dean prior to his arrival. “Because of his sociability, he collected friends, potential guests and faculty. Many of the current features of the school appeared during his tenure and with his encouragement.”

Steffian was born in Cambridge, Massachusetts, earning his bachelor’s in architecture at the University of Pennsylvania, where he studied under famed architect Louis Kahn. He later earned a master’s degree from Harvard. After several years of successful practice, Steffian was lured to higher education. Before joining the University of Maryland in 1983, he served as chair of the Department of Architecture at the University of Miami, where he secured the department’s independence from the School of Engineering. He replicated that administrative coup in 1987 at Maryland as dean of the School of Architecture, relinquishing it from under the Division of Arts and Humanities.

Steffian’s tenure was not without theatre; he deftly navigated a groundswell of political and professional lobbying for the school to relocate to Baltimore in 1987 and made an earnest attempt to establish a master’s degree in landscape architecture, which eventually materialized under the College of Agriculture and Natural Resources. But his linear philosophy to decision-making, which integrated the perspectives of faculty and staff, combined with a doggedness to elevate the school’s reputation and work, resulted in many initiatives that bolstered the school’s growth. During his time as dean, he guided the program’s Master of Architecture into full accreditation and ushered in the school’s first computers. He worked with David Fogle to expand options for students to study abroad, most notably by inking a plan for a study center at Kiplin Hall in North Yorkshire, England.

Steffian was also responsible for hiring some of the program’s most accomplished and beloved faculty, including Brian Kelly, Tom Schumacher, Matthew Bell and Amy Gardner. He often invited Kelly, who lived just down the hall from Steffian at the Kennedy-Warren, to join him and his wife Sarah for dinner or to just talk about architecture.

“John Steffian was a good judge of teaching talent and, to me he was, in a way, analogous to a chef creating a complex recipe of ingredients (the faculty) to make a "complete school" that could deliver a coherent architectural education,” said Professor Matt Bell. “He had the ability to quickly size up a person and their interests and figure out the place where they could be the most effective. John enjoyed the art of conversation and loved to kick around ideas, hoping that in the informality of the discourse, something meaningful and profound would emerge. Often it did.”

Steffian is lovingly remembered by faculty, staff and students for his quick wit and dedication to building a tight-knit, collegial school community; he was a proponent of gatherings on Fridays in the Great Space, often inviting alumni back to mix and mingle with students.