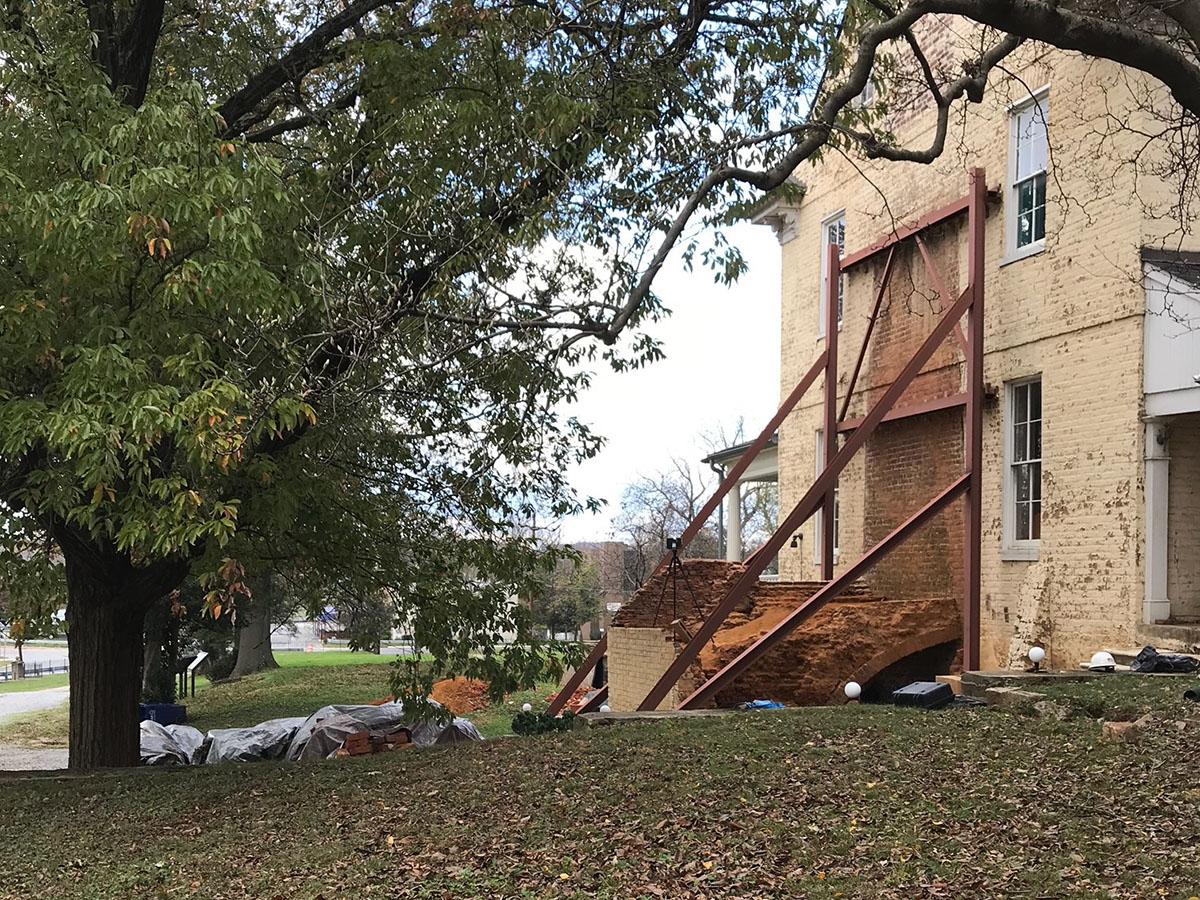 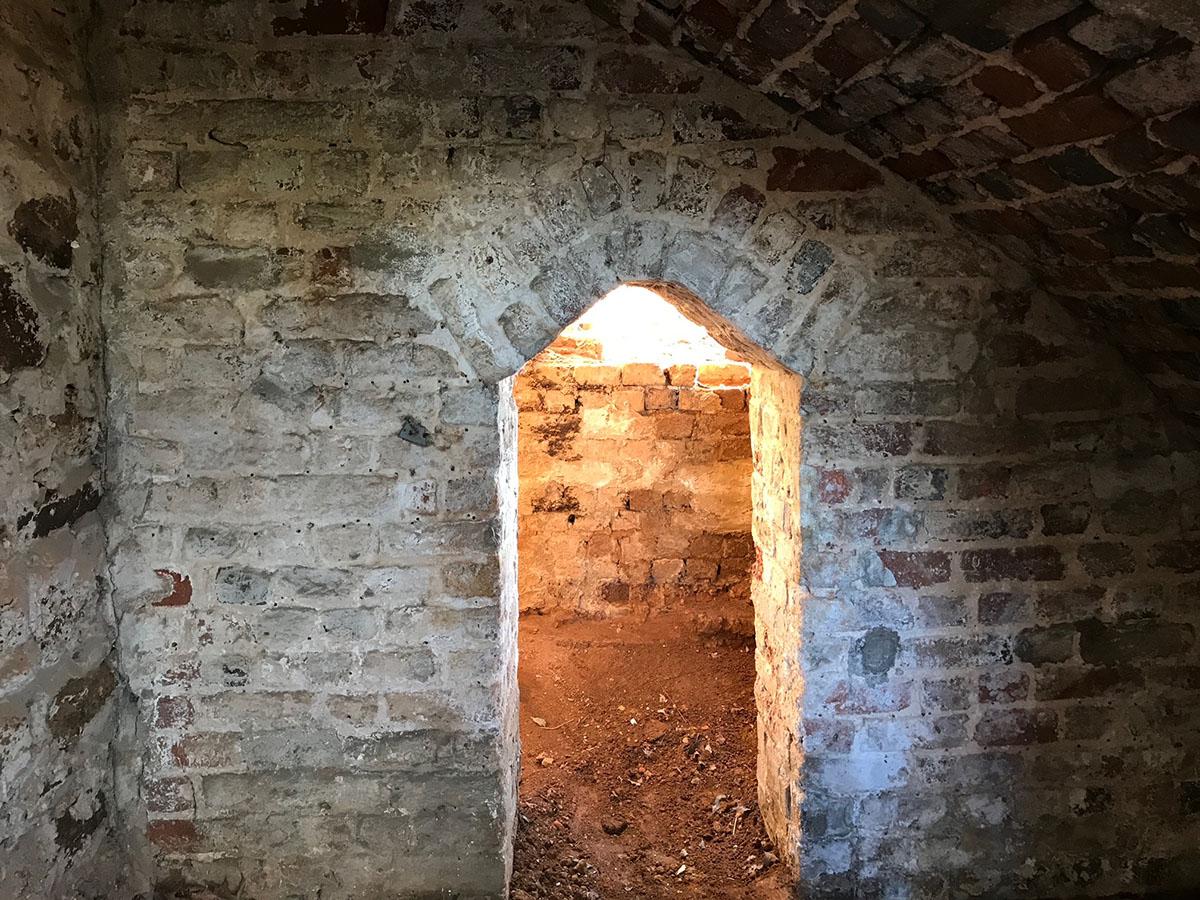 Image Caption
The central opening in the underside of the buttress. Photo courtesy of: Paula J. Nasta.

For as long as there have been buildings, there have been bad builders. Yet the construction mishaps of the past often only come to light when a historic building begins to fail. Now, completed documentation of the buttress at Bostwick House—the historic Prince George’s County home and living laboratory for UMD’s Historic Preservation Program—will allow preservationists to learn from the mistakes of ancestral builders and, with the help of some modern-day interventions, shore it up for centuries to come.

The two-year project, led by doctoral candidate Paula Nasta and Interim Dean of MAPP Dr. Donald Linebaugh, provides a blueprint of the home’s 18th-century brick support, significantly damaged by the earthquake, hurricane and derecho that rocked the Washington, D.C. region in 2011 and 2012. The fact that the buttress exists in the first place is something of an architectural marvel; Bostwick is one of only a few examples in the United States of a buttress added to a home in this manner. It’s construction, says Linebaugh, was most likely a stopgap measure to prevent the home’s collapse and a result of Bostwick’s poor design and execution.

“We suspect it was added because the end walls of the house are not as thick as they need to be for as tall as they are,” says Linebaugh. The configuration of the floor joists, running front to back and not integrated into the end walls, he notes, added to the problems. “It’s a four-story house with these huge chimneys and a wall section that is too thin.”

While the buttress addition allowed the house to live into the 21st century, the significant damage from the earthquake and derecho signaled its demise; along with damage to the main house, the roof of the buttress was blown into a backyard tree, its interior disintegrating with sustained exposure to rain and wind.

“Sadly, some of the interior detail melted away, but fortunately, photo documentation captured much of this detail,” says Linebaugh.

Nasta, preservation students and volunteers carefully deconstructed the buttress, which originally rose from about five feet above the ground to nearly 18 feet at its peak, preserving its mostly intact arched base. The amalgam of brick, stones, dirt, clay, old nails and wood was sorted and loose material was screened to recover artifacts. Nasta says the interior fill was probably originally layered with rocks and low-fired brick that include aggregate and construction debris.

“Aggregate is a loosely defined term sometimes,” says Nasta, whose first day on the job had her hauling debris away from the collapsed structure.

Among the few treasures found digging through the layers—which include parts of tobacco pipes and a fabric covered metal button—were hand-hewn and pit-sawn wooden timbers that suggest the buttress was added approximately 25-30 years after the house was built.

The construction materials that made up the buttress were meticulously sorted, documented and photographed. LiDAR technology was also used to create three-dimensional images of the structure at the beginning, middle and end of the deconstruction process. The team’s final report, which was sent to the Maryland Historic Trust and Prince George’s County last month, comprises photographs, measured drawings and comprehensive documentation, creating a blueprint for the buttress’s eventual reconstruction.

To ensure it’s built to last, the project engineer will now develop a strategy to rebuild the buttress. One idea is an internal steel structure—much like what is currently holding the south wall in place—to provide the support previously provided by the buttress fill. While invisible to the naked eye, says Linebaugh, this approach would add much needed support for the house and allow the architectural anomaly live on.

“A buttress wasn’t a normal thing to add in this context and certainly not in this fashion,” says Linebaugh. “But, because it is so unusual and rare, it’s survival is important. We know enough now how to not only restore it, but do it in a way to ensure its resiliency.