A New Look for a Maryland Icon 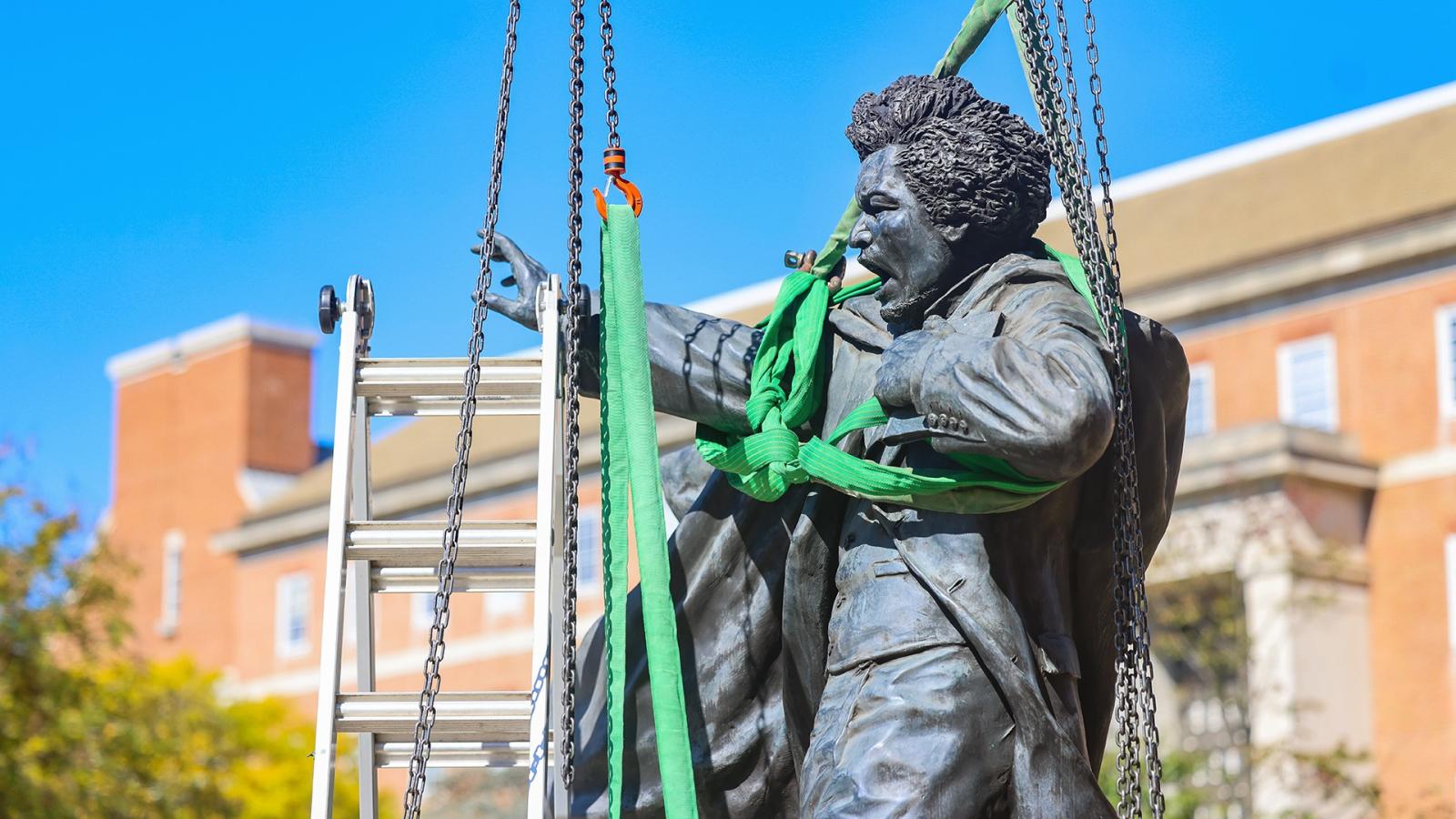 Image Caption
A conservation crew will remove rust and stains and repair cracks in the bronze Frederick Douglass statue following its removal from its base. The work will be done on site over the next three to four weeks. Photo courtesy of Stephanie S. Cordle.

The 7.5-foot-tall bronze likeness of Frederick Douglass is about to move from his perch overlooking Hornbake Plaza. But he won't go far: just about 15 feet from his usual spot. And it won’t be for long: three to four weeks while he and his granite base get spruced up.

Following a painstaking effort that began yesterday to carefully separate the statue from its pedestal, the University of Maryland’s monument to the Maryland-born abolitionist, orator and statesman is undergoing a short conservation process.

A team from Stromberg Conservation will strip its microcrystalline wax, a coating that sculptors often use on outdoor sculptures to protect them from the elements. After cleaning off rust spots and the green patina that naturally forms on bronze, the team will restore the wax coating and place the statue back on its granite pedestal, said Kristy Long, executive director of operations, maintenance and utilities in Facilities Management, which is handling the project.

On Friday, Stefan Woehlke, postdoctoral associate in historic preservation, and graduate student Janet Adesina used laser scanning and 2D imaging to create a reference for the conservationists: “the most accurate real-world representation of Frederick Douglass Square,” he said.

He wasn’t kidding. Woehlke and Adesin stood their device in a tripod that rotated very slowly as it took 45 million measurements from just one scan over the course of 10 minutes. In total, the pair planned to gather 18 to 20 scans.

The statue by British sculptor Andrew Edwards and the surrounding Frederick Douglass Square were dedicated in 2015, honoring his role in advocating for social justice, his place in Maryland history and his ties to Ireland, where he spent time in 1845 and 1887. He was born in Talbot County, Md., then was sent as a teen to Baltimore, where he learned to read and write and eventually escaped bondage and headed to New York City.

The statue depicts Douglass as a young man, in mid-speech with one arm raised dramatically, while the plaza features some of his memorable quotes as well as Maryland and Irish plantings.

“Frederick Douglass Square was created to teach what Douglass has advocated, as well as what he continues to inspire us to do,” said the late Distinguished University Professor Ira Berlin, who led the faculty group that fundraised for its construction, at its dedication. “We memorialize Frederick Douglass in the center of campus in a space that is both classroom and monument. It is a place to contemplate and celebrate the ideals that Douglass exemplified.”