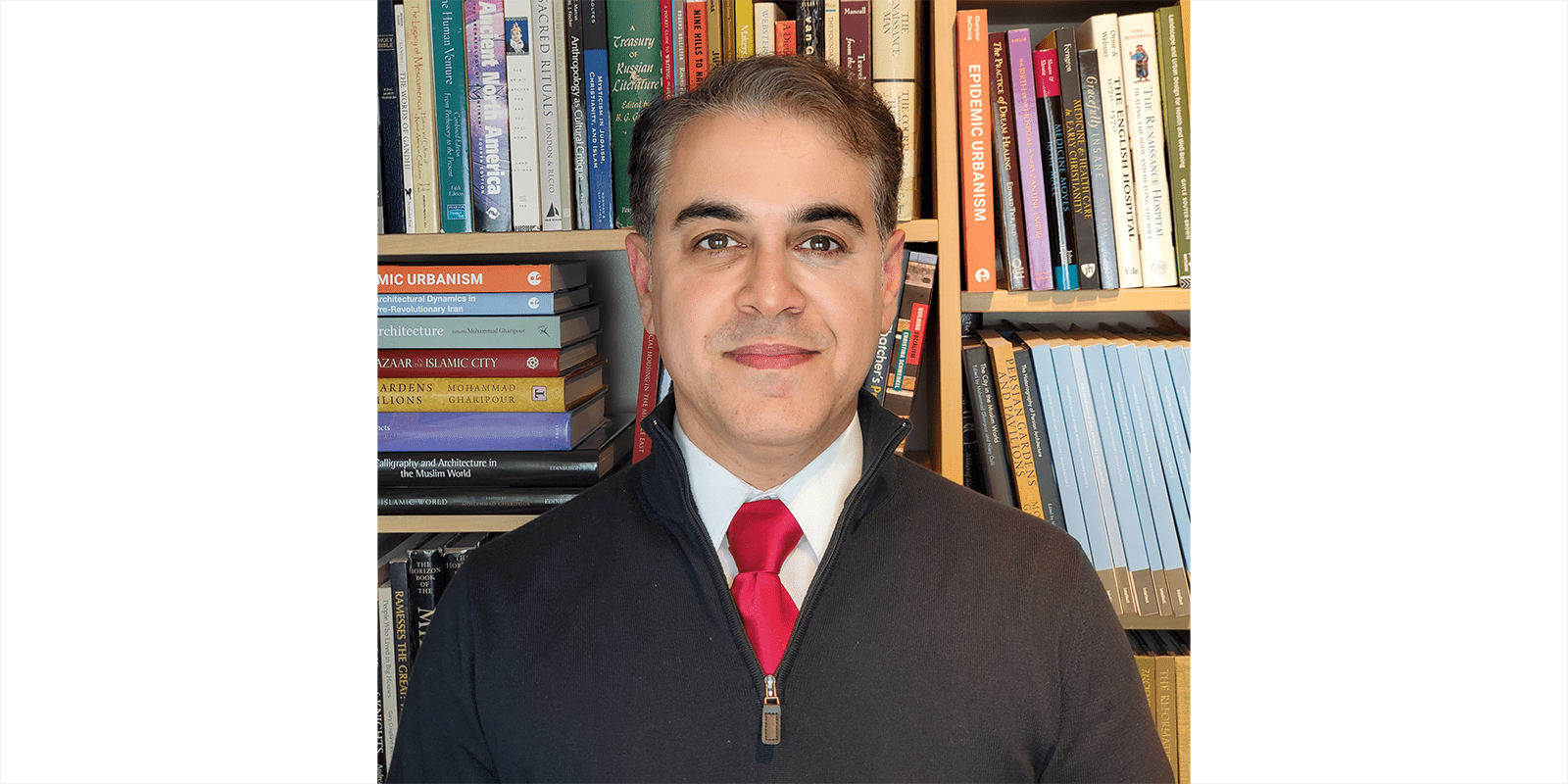 The School of Architecture, Planning and Preservation will welcome Dr. Mohammad Gharipour to the University of Maryland this August as a professor of architecture and the next director of the Architecture Program. An accomplished and award-winning scholar, leader and teacher, Gharipour comes to UMD from Morgan State University’s School of Architecture and Planning in Baltimore, where he is currently a professor and chair of the Department of Graduate Built Environment Studies and director of the Graduate Program in Architecture. He takes the reigns from Professor Brian Kelly, who is stepping down as director after over 25 years leading the program.

Gharipour’s resume reflects a commitment to environmentally and socially responsible architecture that prioritizes equity and human resilience. At the heart of his work lies a curiosity for different perspectives, seen in his dogged pursuit of historic inquiry, his affinity for cross-disciplinary collaborations and his engagement as a mentor and educator. The author and editor of 14 books, Gharipour is also editor and founder of the International Journal of Islamic Architecture, a publication he launched after noticing there was not one journal focusing on both historic and contemporary Islamic architecture. He has earned fellowships and awards from organizations including National Endowment for the Humanities, Society of Architectural Historians, American Institute of Architects, Foundation for Landscape Studies, Fulbright-Hays Program, Council of Educators in Landscape Architecture and Fulbright.

Born in Tehran, Iran, Gharipour was raised in Isfahan, one of the largest and most architecturally influential cities in the Islamic World, a rich upbringing that shaped his view of cities. After earning an architecture degree at the University of Tehran, he pursued his Ph.D. at the Georgia Institute of Technology, where he studied under Ronald Lewcock, one of the leading scholars of Islamic architecture.

But it was Gharipour’s work with another Georgia Tech colleague, Professor Craig Zimring,  that sparked his interest in the nexus of architecture and human health, a topic he revisited after beginning his career at Morgan State. In Baltimore, he saw a tale of two cities: one, a modern campus housing the world’s foremost research and teaching hospital, John’s Hopkins; the other, crumbling, outdated infrastructure of the inner-city clinics that serve much of Baltimore’s uninsured.

“You see these buildings designed in the 1970s that haven’t undergone any significant physical improvements, but also haven’t been updated to address the needs of the community,” he said. “Not enough was being done and that motivated me.”

With the support of a grant from the National Institutes of Health, he launched an interdisciplinary design initiative around community clinics and health-promoting infrastructure in Baltimore, the basis for several student studio courses at Morgan and cross-sector collaborations across both pedagogy and practice; ideas gleaned from the initiative are poised to serve as a model for other cities, including the use of vacant buildings—often in ample supply in post industrialized cities—as clinic sites during crisis.

As COVID-19 tightened its grip on the world in March of 2020, Gharipour and Columbia University colleague Caitlin DeClercq hatched an idea for a small conference to examine the complex relationship between a city’s built and social fabric and epidemics. The international response was immense and, in short order, Epidemic Urbanism was born: a multidisciplinary collective of global scholars, teachers, practitioners and the public who share research, ideas and dialogue around the undeniable impact of public health issues on the practice. Capitalizing on the virtual platforms made readily available by the pandemic, they look at the challenges and opportunities of the urban realm: shared spaces, senior housing, architectural education and more. Today, the Epidemic Urbanism Initiative hosts academic liaisons in 76 countries and in 2021, released a book; a new series of workshops launches in June.

The global sharing of ideas, says Gharipour, broadens the already good work and research happening at a local scale, and could hold the prescription for finding solutions.

“That international collaboration is really needed. Our liaison from India hosts workshops that are popular and well attended by her students. But what if, instead, she had 20 students from 15 countries? That’s going to result in different types of questions and will help us push the topic of health equity further.”

Gharipour recognizes the ramifications of health equity as an educator as well. The pandemic, he says, exacerbated already difficult economic, mental and social health issues for his students, faculty and staff; while an ardent subscriber to tools like mentorship and mindfulness before the pandemic, he says that methods to enhance student and faculty support are more important than ever. At Morgan State, Gharipour integrated a number of initiatives to nurture a tight-knit educational community and build a holistic, supportive environment: he integrated hands-on experimentation into traditional lecture courses; established partnerships with the community, regional design firms and with other disciplines; instituted student mentorship and mindfulness programs; and involved students in faculty research and teaching.

“As a community, we have this unique opportunity to always be learning from each other, to always be curious,” he said. “I’m not saying that, as educators, I’m not there to teach them something, but if we are constant learners, we can have a more vibrant educational environment.”

It is a spirit he saw during his visit last month to College Park: in interactions with faculty and alumni; in the conversations he observed in the program’s bustling studio; and emulated through student projects. He concedes that, despite the fact he was there to interview for a job, the warm, welcoming community at MAPP kept any nerves at bay. He sees his move to Maryland as an opportunity to build on the meaningful work he says is already well underway.

“UMD has this incredible infrastructure and I’m so amazed by what has been built by Brian Kelly, the faculty and staff,” he said. “It really motivates me and I’m looking forward to this journey together.”