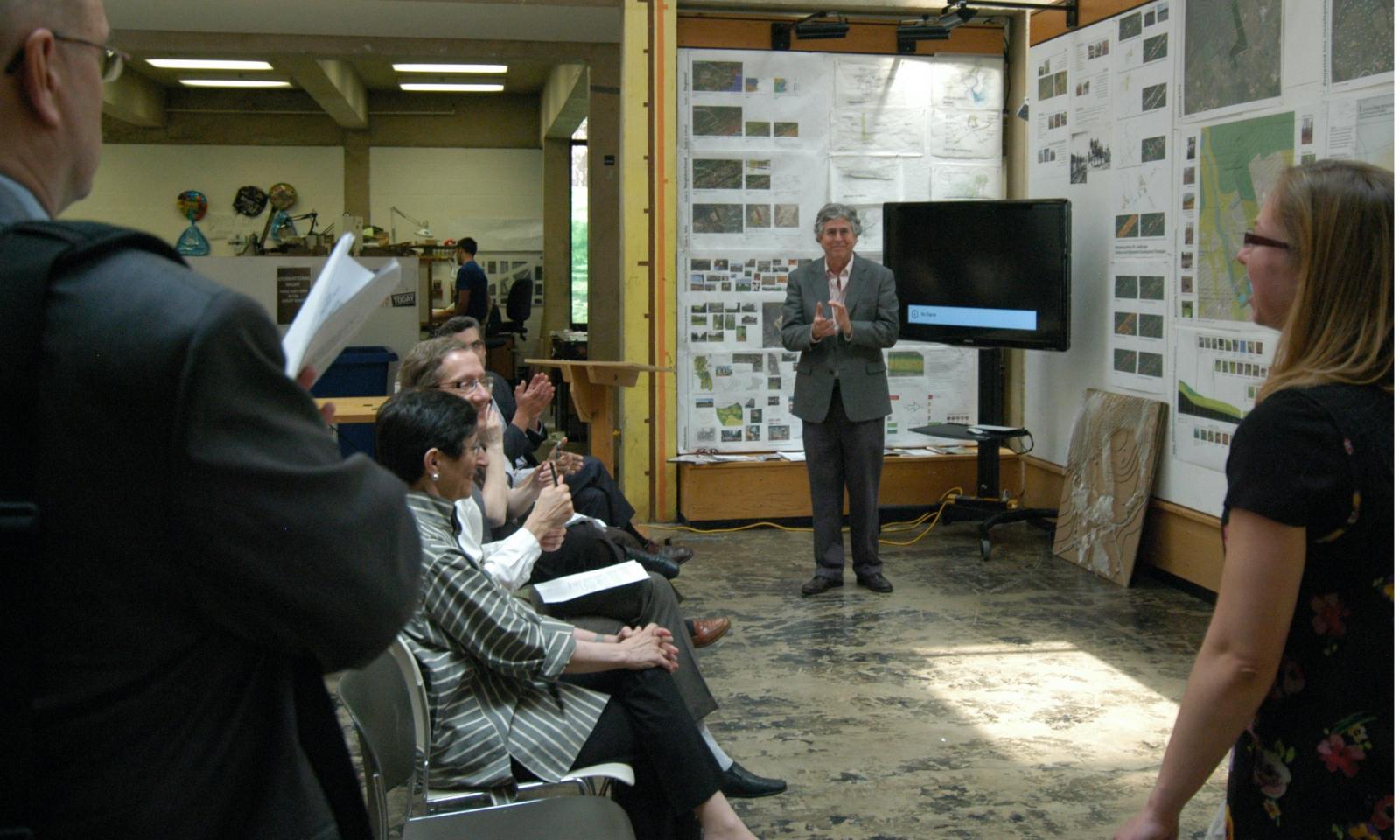 Bovill, who retired in December, built his 27-year career at the University of Maryland by, as he calls it, “straddling the fence.” He is S.T.E.A.M. in human form, leveraging his expertise in both architecture and engineering to shape the sustainably minded curriculum the Architecture Program touts today. He is a fan favorite in the classroom, winning hearts and minds by adeptly breaking down the complex work of structures and systems with approachable enthusiasm and his signature “Bovill Hands.”

An early pioneer in building technology and energy design, Bovill is an international expert in the narrow field of fractals, earning him the name “Mr. Fractal” among colleagues, but more importantly, helping students understand how to emulate natural systems through design. He brought critical building science principles to MAPP’s architectural education, arming future designers with the tools they need for 21st century building practice.

“Carl is a true renaissance man,” says Assistant Professor Ming Hu. “It was absolutely an honor to work with such an accomplished colleague. He set a very high standard for me and motivated me to work hard, yet to be humble.”

Bovill grew up in Northern California, the son of an artist and a professor of orthopedic surgery. As a college student, he divided his time between conquering the Pacific surf on his board and conquering the daunting mechanical engineering curriculum at UC Santa Barbara. After earning his master’s in mechanical engineering at Berkeley, he returned to UC Santa Barbara, where he worked for the Institute of Environmental Stress. Yet he continually found himself drawn to the university’s design library. Architecture, he says, had been a fascination from an early age; the more he read in the library, the more his career aspirations shifted. Bovill soon found himself in the Master of Architecture degree program at the University of Hawaii, where he excelled, putting his engineering background to use on the Hawaiian Energy House. Upon graduation, he returned to San Francisco and became part-owner of a small, soup-to-nuts holistic design-build shop that specialized in active and passive solar. But his migration to education seemed predestined, and he soon was following in the footsteps of his father and brother into higher ed.

“In some ways education was a family business,” he laughed, noting that one of his two daughters is also a professor. “Not to mention, it’s hard to be both an architect and an engineer in the practice world. But in a teaching environment, it becomes a really useful thing.”

His first position at the University of Tennessee had Bovill teaching a technology integration studio, which inspired his first book, Architectural Design: Integration of Structural and Environmental Systems. He returned to the “motherland” of California after earning tenure and was teaching at California Polytechnic State University in San Luis Obispo, when Maryland came calling.

“Carl was an amazing hire, he was just a breath of fresh air,” says Professor Emeritus Ralph Bennett, longtime colleague and collaborator. “He had this kind of California temperament, but is one of the brightest people I’ve ever met. He brought so much knowledge with his solar work in California and, as an academic, he was a true scholar in technology, methods and structures. His contributions really changed the game at Maryland.”

At Maryland, Bovill became the architect of MAPP’s first technology curriculum, redesigning course content to incorporate structural and environmental issues into the design process. It was a transformational moment in the evolution of the program, says Program Director Brian Kelly, and Bovill was a major player in bringing the technologies into the design studio. He created a sustainable systems course, picking up from the efforts of Bennett and Professor Bill Bechhoefer that had diminished with waning national interest in solar. What started as an elective with only five students is now a pillar of the five-part core sustainability curriculum consisting of energy systems, structures, environmental controls, materials and methods, most of which Bovill has taught at one point or another. Bovill was instrumental in creating ARCH600: Comprehensive Design Studio, now considered a national standard in architectural pedagogy.

“Carl's teaching expertise and his demeanor were, in no small part, major contributors to the success of the studio that resulted in numerous national awards as well as a significant change in the requirements set forth by the National Architectural Accrediting Board (NAAB),” said Kelly. “After a successful end of semester review of student work in the mid-1990s, several guests to the ARCH600/611 juries, who were also NAAB board members, advocated for comprehensive design to be part of every accredited program in the United States. The rest is history.”

Outside the university gates, Bovill received near-celebrity status for his research publications, most notably his work in fractals. He published three books, all of which are prolifically sited. His book on fractals, Fractal Geometry in Architecture and Design, has been translated into several languages.

“Probably most people in our school do not know this, but Carl is considered one of the global leading scholars in fractals,” says Hu. His method, called ‘Bovill’s Method’ or ‘Bovill’s Rule’ is a method or model architectural scholars and building scientists can apply to determine quantitative measures of visual complexity in architectural form. You will find that lots of computational designer/scholars cite his work, and use his rule to develop the computation algorithm to do generative design.”

But if you ask Bovill what he hopes he’ll be remembered for, it is his interest in and care for his students. Bovill was a hands-on, engaged teacher, mentor and sounding board for generations of fledgling architects (and one student who ended up in engineering). He maintained a sincere open-door policy and advertised it prolifically with his students. Many took him up on it, procuring counsel on coursework and projects, but also challenges outside of school, career advice and landing a first job. He has been a mainstay in the thesis process, as both an advisor and an active participant in the thesis presentations. He organized the school’s commencement ceremonies for years. His affinity for Hawaiian shirts, which are in heavy rotation during the warmer months, inspired a Beaux-arts ball, “Carl’s Hawaiian Luau,” which he proudly lists on his CV.

“I have always been inspired by Professor Bovill’s passion and intelligence, especially in the realm of environmental design. But more than just helping me strengthen my love for design, Professor Bovill taught me the importance of empathy and listening,” says M.ARCH grad Yukari Yamahiro, who took five classes from Bovill. She remembers the care he took with her when she broke down in studio during a particularly stressful time in her life. “He helped me sort through my mangled thoughts, both personal and school, into a clear direction. Bovill’s classes taught me about structures and systems, but his passion and empathy taught me how I need to show up and contribute to the world around me.”

Bovill is excited for retirement, and equally contented to leave the technical systems and structure work to Hu, who he considers an “absolute superstar.” He will spend time visiting his kids and grandkids, possibly by cross-country road trip if COVID-19 dictates. He and his wife are moving permanently to their home in Sea Ranch, California, a windswept coastal enclave about 10 miles from the San Andreas fault. Asked if that makes him nervous, he spoke with the confidence of an engineer and the eye of an architect.

“Well, it’s a beautiful house and its really well built in terms of engineering and sheer walls,” he said. “I found out who the architect was and wrote him a little note to tell him how much I loved the house, and he was thrilled.”