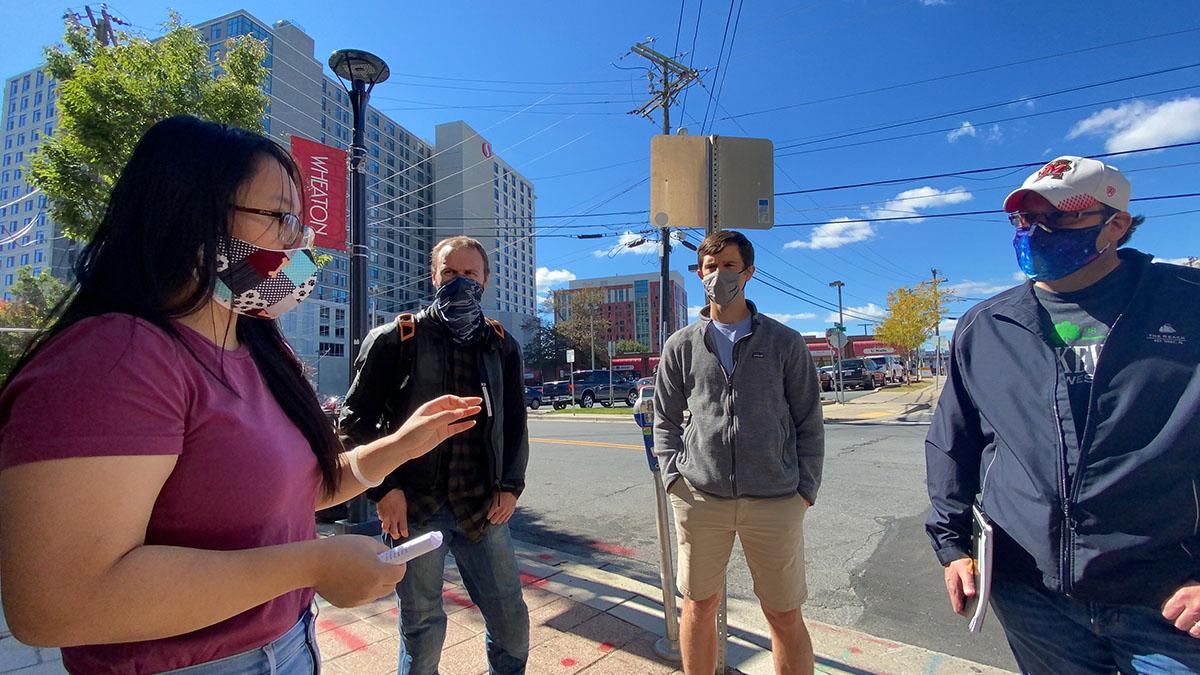 A dilapidated sign—its red, angular letters still visible—sags on a crumbling building, one of many forgotten places flanking an overgrown block of Baltimore’s Park Avenue. But for historic preservation students, it’s a clue to a lost piece of Chinese American history: the China Inn, a WWII-era Chinese restaurant, thought to be one of Baltimore’s first.

Unearthed through archival research and Google Street View, the discovery of the lost restaurant was part of a semester-long case study used to develop a tool box of techniques—some time-tested, others very 21st century—for uncovering the history and forgotten places of minority and ethnic communities.

Context statements typically rely on published works, but in the case of Chinese Americans in Maryland, there was a dearth of readily accessible information, said Michelle Magalong, a presidential postdoctoral fellow in UMD’s Historic Preservation Program who co-led the course with Associate Professor Jeremy Wells.

Racial and ethnic minorities are significantly underrepresented in the preservation field in part because of a history of implicit bias and stringent preservation guidelines; that has led to inadequate documentation of these communities’ historic structures, she said. The situation is receiving increased attention by preservationists, who are now racing against time, deterioration and redevelopment, and who face apprehension and mistrust from community members.

“Normally, a consultant can do some primary and secondary research and just run with it, but no one has focused on this,” she said. “The students had to create an entirely different technique.”

Overcoming these obstacles required a multilayered approach that meshed the traditional and the novel. Students combed Facebook groups and other social platforms, connecting with commenters on posts of old photos, and employing creative search terms to uncover clues that otherwise would go undiscovered. They overlaid archival documents, like business records and census data, with newspaper clippings and used digital tools like Google Street View to piece together a Chinatown largely forgotten: An old restaurant advertisement from the ’50s led them to a building on Google Maps, which connected them to buildings with similar architectural details, such as ironwork doors or timber frames.

Students even took to eBay, which graduate student Sam Bohmfalk said is a great place to find ephemera that can lead you to a person. “Nothing online was off-limits. If it’s searchable, it’s an archive,” he said.

Online tools also offered a workaround for the disruption of typical pathways to information created by COVID-19. Karen Yee, a graduate student in historic preservation and urban planning, learned first-hand the barriers the class would face in the fall due to COVID; her spring internship with MHT, which provided background for the initial grant application and created a foundation for the fall project, was derailed by state shutdowns in March.

“This could very well be our new normal,” said Magalong. “Traditional searches can be hampered by a pandemic or deemed ineffective when information is scarce. Either way, preservationists need multiple options and new strategies when places like the archives and special collections aren’t an option.”

Central to identifying places and spaces important to a community’s heritage, the students found, is involving it in the process. The use of online crowdsourcing emerged as an effective tool for engaging groups when face-to-face isn’t an option, and provides an alternative to more traditional community meetings, which can be hampered by language barriers or accessibility. Tapping special interest groups and conducting targeted oral histories and surveys also garner a wider perspective. Broad community engagement is typically not applied to preservation efforts, but doing so not only empowers communities and provides ownership, it opens doors to people and information preservationists can’t access through archives alone.

“Find the key informants and they will take you to their community,” said Magalong, who also serves as president of Asian and Pacific Islander Americans in Historic Preservation, a national volunteer-run, nonprofit organization.

Building interpersonal and communications skills are critical, she said, to help students navigate conversations with different partners and audiences. Magalong and Wells tapped practitioners who have successfully conducted Asian American and Pacific Islander context studies in the past five years and are currently embedded in preservation and community work to help students stretch beyond the traditional preservationist skillset.

“I want them to walk out of this program with the tools and skills they need to engage communities in a way that’s intentional, inclusionary and authentic.”

Bohmfalk said the first step to bridging the diversity gap in historic preservation is recognizing the people who haven’t been included in the narrative.

“Our hope is that with this tool kit, MHT can be better prepared to do the research necessary to engage the community and develop a statement that is representative of the heritage, legacy and impact of Asian Americans,” he said.