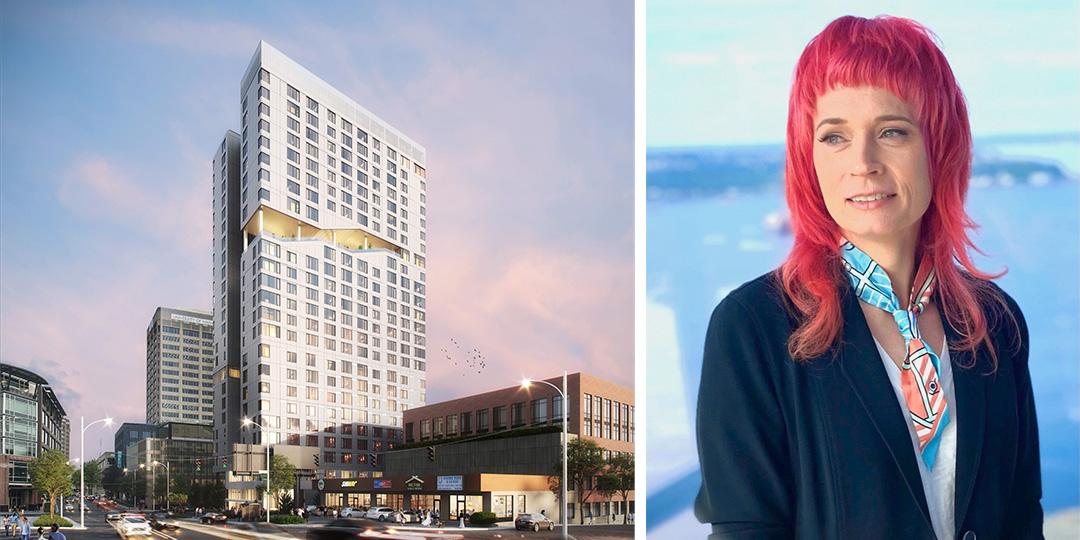 The majestic skyscrapers designed by Julia Nagele (M.ARCH ’96) don’t reach Seattle’s cloud cover in a conventional fashion. Glassy and gleaming, they shift and undulate, emulating both sophistication and whimsy. Skyglass, Nagele’s zig-zag creation under construction for Seattle’s downtown, seemingly defies the laws of physics; her latest project near the University of Washington shoots upward then pauses, two open-air “social greenways” slicing through its façades.

In many respects, Nagele’s work is a fitting metaphor for her professional trajectory, which she admits was anything but linear. A 1996 graduate of UMD’s Master of Architecture Program, her life abruptly shifted with the chance meeting of her future wife, Ann, in the Pantheon during a study abroad trip to Italy. After graduation she moved to Seattle “sight unseen,” landing a foot in the door of a local firm with the help of a phone call from Former Dean Steve Hurtt. Ebbs and flows both professionally and personally eventually brought her to Hewitt - Architecture at “just the right time,” she said. “I think there’s a lot of value in allowing uncertain things lead you along.”

Today, Nagele is Hewitt’s principal director of design, where she works in what she calls “the fabric of the city:” high-value, architecturally significant projects woven into Seattle’s powerful natural landscape and urban conditions. She brings a focus and skill to her designs that have earned them front row seats on Seattle’s skyline, including the Emerald, one of the tallest skyscrapers on the West Coast designed by a woman; she is one of only a handful of women architects designing towers in the world.

Nagele finds comfort and inspiration in the studio, whether it’s at Hewitt or surrounded by her students at University of Washington, where she teaches design as an affiliate assistant professor. Her passion for teaching and mentorship, which started as at TA at Maryland, came full circle during the pandemic when she returned to serve as a thesis critic. She will address the class of 2022 as MAPP’s spring commencement speaker.

Below, Nagele talks about vertical inspiration, owning insecurity and the value of informal exchanges:

Your work and reputation have caught the attention of several high-profile publications, from Forbes to Dwell. Did you expect to end up making a name for yourself in skyscrapers? It was certainly not part of a five-year-plan. The first skyscraper I ever designed was the Emerald, which coincidentally is 18 feet away from my office window. Who would have planned something like that? There’s been a lot of development interest in the city of Seattle both nationally and internationally. It had the most tower cranes erected at one time than any other city in the country and stayed that way for 10 years—and we’re still incredibly busy. By having that local expertise to understand the conditions of the design culture and the city’s values, the circumstances were set for Hewitt—which has a longstanding reputation in Seattle—to take on this kind of work. It wasn’t a planned thing, but we work really hard to do a good job.

What are opportunities in tower design that you might not get designing midrise buildings? What’s exciting about towers like the Emerald and our current work is that they operate at multiple scales of expression. The best example of this is our Skyglass project, which, if you can imagine it, looks like a crinkle-cut French fry standing on its end. But at its base is a four-story brick building; they look like completely different buildings. While the base responds to the pedestrian scale and the city block, the tower has a different set of design cues that’s not seen from the street. If you’re living there, you’d have perspectives of the Olympic mountains, Lake Union, Elliot Bay—plus this portion of the tower is also seen from a distance. Skyglass tower uses these natural features to create its own scale of expression that’s completely different from its base. If two buildings can sit next to each other, why can’t they sit on top of one another?

Your building, Mama Tower (and the adjoining Baby Tower), is currently moving through the design review process. It’s a stunning example of how creative you can be in a unique context. What’s behind the name? We were one of several firms interviewing for the job; we had an idea that we thought told a great story about the context of the block. Plus, by using the floor plate averaging in the zoning code we were able to fit two towers on the site—and we were pretty sure our competitors were only going to propose one. We wanted to win this project. It was just down the street from the Emerald, and we knew we’d be watching it under construction for several years. Our competition was an international group, and I was likely going to be the only woman presenting.

It was early morning, and I was waiting for the light of the coffee maker to go on with these thoughts in my head—it was just this wave of insecurity. Our design proposal had a tall structure and this smaller structure, and I was reminded of this concept from school of a “mama” and “baby” parti; it was a phrase not always used in a positive light. I pulled out a post-it from the junk drawer and doodled this little sketch of a mother and a child with a balloon. When I got to the office, I shared how I was feeling with my partner Sean. He said to me, “You’re going to go into this thing as the only woman in the interview and we’re going to call this thing Mama and Baby. Not just as a nickname in the office—we’re going to own it.” And we did and the interview went really well.

What’s an “easter egg” aspect of one of your designs that you are particularly proud of? I think the idea of an easter egg is fundamental to our approach at Hewitt - Architecture. We try to seek out not-easily-seen solutions or opportunities in a project. An easter egg to me is what it means to be innovative. Skyglass has an easter egg that is also doing a couple of valuable things: the rectangular floor plate is the same throughout the building, but as they stack vertically, the floorplate shifts slightly along a diagonal line, forward and backward, creating all these facets. What that does is expand and contract the perimeter of the building and, in turn, the apartment units. So, at its smallest point, it’s more affordable, like a studio, and at its biggest point, you may have a two-bedroom. The client has the same number of units, but because there is a small shift in the floors, they get a high variety of choices. And it offers a special experience with this angled façade that makes it a really nice place to live. So, we’re responding to these abstract architectural conditions in terms of form, but the form is being generated by having these practical ways to offer a lot of variety and diversity into the unit types and have unique spatial qualities in each one.

You are in an elite group as a female architect, but also as a member of the LGTBQ+ community—in many respects you are trailblazing. Do you feel a sense of responsibility in that role, and what message do you hope people get from your story? I do feel a sense of responsibility. Usually when I talk about these kinds of subjects, I feel like the need to put a disclaimer out there that there are privileges that people have—that I have—and there are real struggles that people deal with; my experience is going to be quite different from other people’s. But when I think about responsibility, particularly as a female leader, I do feel like I need to put myself out there, that the students that I have know the work that we do and know I’m responsible for the meaning and design behind it. I think just being out there and visible is important. But the other approach that I’ve taken, for better or worse, is I don’t really ask for permission or acceptance. I just move forward as if my situation with Ann is no different than anybody else and we just operate that way.

The LGTBQ+ community—I mean, the letters really don’t do it justice. There are just so many different experiences. But one of the common threads is that somewhere along the line, we all must claim who we are and share that with someone. And in doing so, more times than not, there are really difficult conversations that have to happen in the process. One of the valuable things I’ve taken from that is that I know how to have difficult conversations. And good things can happen from having those conversations that empower you to do it again and again under different conditions. I think for many of us—or I’ll just speak for myself—it builds a sense of fearlessness. And that’s a valuable tool, especially when you’re working on intense projects like the kind we work on.

What’s getting you out of bed in the morning these days? From a practical and very literal standpoint, it’s our four-year-old Boston terrier, Rosie. But I’m at a point right now where I absolutely love what I do. What I really love about our current work is that we’re finding a sharper meaning and purpose to it. The social greenway concept in our OneU Tower is an example of that. The university neighborhood has a demographic that trends younger than the rest of the city; they’re a group that’s more connected than ever in some ways but they’re also a group that has reported lacking a meaningful social connection. More height in the zoning allowed us to stretch the building out and create these two outdoor spaces that divide the building into what we call sub-neighborhoods. We took our inspiration from the streets, parks and campus plazas, where these serendipitous encounters can happen and where people can gather and meet. For us, that’s a unique way for a tower to be an extension of the urban condition, rather than a figural object that happens to co-exist within a street grid. Designing these projects gives us a lot of excitement and meaning to our work.

Without too many commencement speech spoilers, what’s a lesson you learned early on that’s stuck with you? I think it’s looking for the wisdom in things that are just said in passing. They have been really valuable over the course of my career. When I was doing my thesis at Maryland, there was an opportunity for students to apply to be a teaching assistant for Karl Du Puy’s undergraduate design studio. My thesis project was ambitious, so I wasn’t going to apply because I didn’t think I could make that commitment. But Brian Kelly said to me in passing, “I think you should probably apply. I think you might find over the course of your career that this is something you’re interested in.” And so, I did. Years later in Seattle I was invited to teach a graduate design studio at the University of Washington. I thought, how can I do that and do this job at the same time? But I remembered that I pulled it off when I was doing my thesis—and it turned out I really loved teaching. This was just something that Brian said in passing and it stuck in my mind. I had the opportunity, and he was right. I don’t think he necessarily saw it as mentorship, but it turned out to be really good advice that played out exactly as he thought it might. It’s recognizing those exchanges that happen in an informal way and just going for it, down that unknown path. It’s a bit like public spaces in the urban condition; they’re places where serendipitous encounters can happen between people, just like when I met Ann in the Pantheon.