Sketching out a career in art: Thomas Bucci (M.ARCH '90) 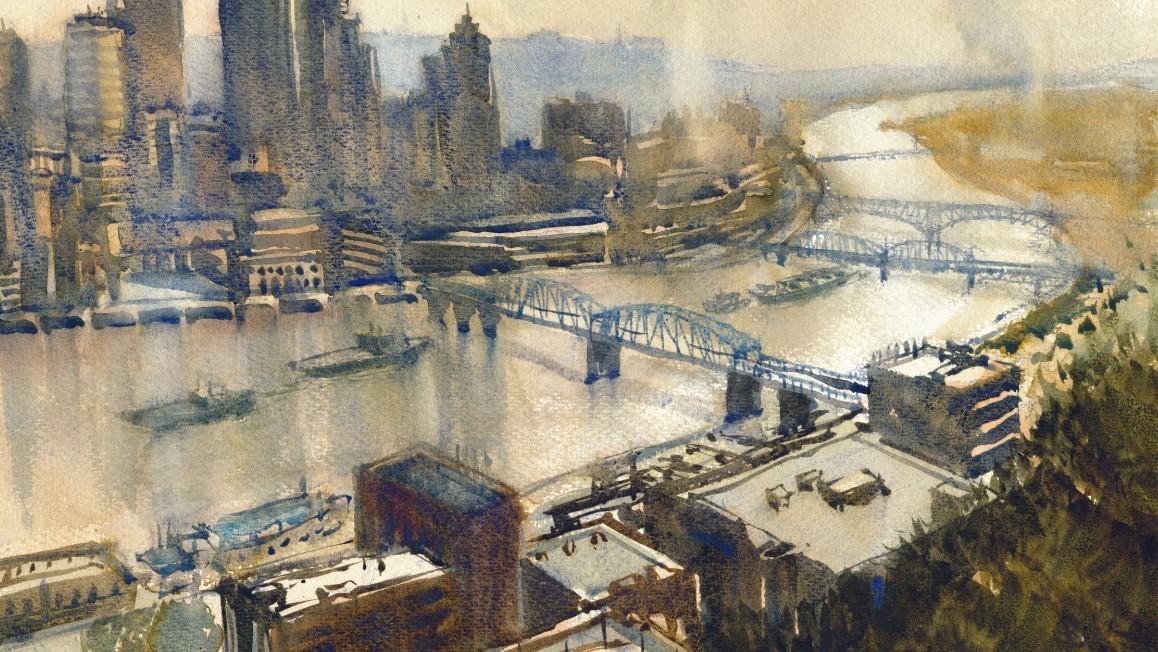 Twenty-one years ago, a giftshop set of watercolors changed Thomas Bucci’s professional trajectory. A newly minted architect working for his mentor, Mark McInturff, in Washington, D.C., Thomas’ chance excursion to a watercolor exhibition while on a trip to London (at Mark’s recommendation) was an experience that would reignite his passion for art and merge it with his love of buildings to forge a successful career as an American watercolorist.

Thomas began his journey as an undergraduate in art school, where he yearned to paint and draw, but found he was out of his element in the 1970s art scene. “I was almost ridiculed for wanting to pursue something so archaic. Everyone was either talking or creating ‘installations.’ No one was just painting.” After a few years of working in graphic design in New York City, Thomas’ interest in cities and the urban landscape lured him to architecture school at UMD. Life and work at UMD gave Thomas something satisfying to sink his teeth into, and a reference point that would later inform his career. He found himself able to resonate with the cityscapes he grew up loving in a new way. Once out of school, Thomas continued drawing—a common thread of many practicing architects—carrying a sketchbook virtually everywhere he went. Then, in the late 90s, he encountered J.M.W. Turner’s renowned watercolors on that fateful visit to London. He stopped by the museum giftshop on his way out where he bought a tiny box of watercolors, a purchase he now considers a “revelation.”

It didn’t happen overnight. The inspired brush strokes of Turner that seemed so effortless were, in fact, quite a lot of work. Thomas leaned on the work ethic he developed at Maryland to hone his skills and eventually turn his love of art into a career. “The kind of art I’m making takes an enormous amount of work and time. I learned a lot of things at Maryland, but the most important thing I took away from my education is that you have to work really hard at something to get good at it.”

Thomas paints every day, usually in the plein air style, or outdoor daylight. A D.C. resident since ’85, his line of work lends itself to travel, with the landscape in front of him serving as inspiration, not necessary gospel. “You don’t have to paint exactly what you see, you can take it as a hint.” His expansive body of work focuses mainly on the built environment—from cafes and churches to boats and farmhouses —capturing the movement, energy and occasional stillness of city life, as well as the stark tranquility of rural landscapes.

While he primarily offers his work through his website, thomasbucci.com, in the past few years he has ventured into galleries, including a show this spring at the Hill Center Galleries in Washington, D.C. He also began applying to several professional venues, showcasing his work with the Philadelphia Watercolor Society and New American Painting and Sculpture, among others. This year, one of his pieces was accepted by the American Watercolor Society for their 150th annual international exhibition, thought to be the highest honor for a watercolorist. His selected painting, “City Hall, Philadelphia” appeared at the Salmagundi Club in Manhattan in April. A second piece, "Jefferson Market Gothic" is part of the 2017 Annual Painting and Sculpture Exhibition at Salmagundi, July 31-August 11.

Thomas credits his education at UMD as an eye-opening experience, one that taught him more about drawing than his time in art school but, more importantly, one that allowed him the self-discovery to ultimately follow his passion. “My grandfather was a stone mason and a carpenter. I’ve always loved buildings. So, I followed my curiosity, not expecting that it would lead me back to art.”